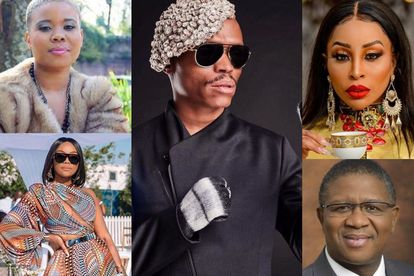 Medi personality Somizi has a history of rubbing people up the wrong and has gotten away with dodgy things in the past.

He’s betrayed some of his closest friends, business partners, and even tarnished people’s reputations way before he met his now estranged husband Mohale Motaung.

Remember when he flatly refused to apologise for his attack on two journalists?

The South African Editors Forum wanted Mhlongo to issue an unreserved apology to Sunday World acting editor Kabelo Khumalo and City Press journalist Julia Madibogo after he shared their numbers with millions of his followers on social media.

The journalists wanted Mhlongo to comment on allegations that he was divorcing his-now estranged husband, Mohale Motaung after speculations of their divorce began spreading in January this year.

The media personality was allegedly accused of intellectual property theft for his hit show Dinner at Somizi’s in September 2020.

Evidence emerged on social media that the idea of “Dinner at Somizi’s” was not his original idea, but that of Hastings Moeng.

He also told a journalist that his mother should have aborted him after they published an article about his cooking show being put on hold because of copyright disputes.

Mhlongo accused singer and choreographer Chomee of stealing his designs after she won at the Metro Awards.

His friendship with Bonang Matheba ended when he spilled on her to DJ Zinhle Jiyane. He informed Jiyane that Matheba was sleeping with AKA while DJ Zinhle was pregnant with AKA’s daughter Kairo Forbes.

Mbalula took Mhlongo to court for announcing that lockdown would be extended on his Metro FM show before the president of the country Cyril Ramaphosa announced it. Mhlongo mentioned Mbalula’s name on his radio show as Fikile and the duo’s friendship went downhill.

It is unclear what happened between him and his former BFF reality star Khanyi Mbau. But there have been numerous reports that their friendship ended in tears.

Also read: 50/50 divorce for Mohale? A look at Somizi’s net worth, assets [photos]