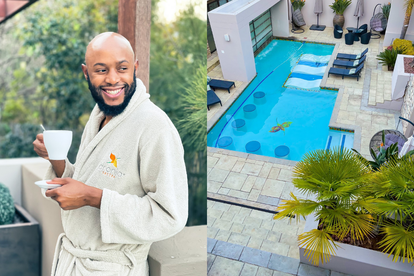 South African TV personality Somizi’s husband, Mohale Motaung just got a good online dragging after he shared some snaps of himself enjoying a relaxing day at the spa.

While Mohale was just flexing his nice life, many were soon accusing him of using his rich bae, Somizi, only for his money.

Mohale Motaung, a local celeb and husband to TV star Somizi, headed online this weekend to prove that not everyone is suffering due to the unrest that recently swept across Mzansi. In various snaps, he can be seen enjoying a relaxing day at a spar.

“Selfcare Sundays,” he captioned the snaps.

While there is nothing wrong with that, perhaps he should have “read the room” before bragging about his soft life.

ALSO READ: State of Somhale: Mohale spends his birthday with another man [photos]

Unfortunately for Mohale, his post may have come too soon for many South Africans who are still dealing with the aftermath of various looting incidents at various malls and shopping centers in the country. Pretty soon they were all calling him out.

To make matters worse, he was now also being accused of “looting” Somizi. One guy even went as far as to telling Mohale that he was the biggest looter in the country. Read a few of their comments about it below:

Not everyone is hating on him though…

While the comment was full of people accusing him of being a looter of note, not everyone was had bad stuff to say. Some people complimented him while sharing a number of well wishes:

“Keep shining beloved! Rest and relaxation is part of growth and your productivity cycle.”

“Take care of yourself mntanasekhaya, life is too short.”

ALSO READ: State of Somhale: So are they getting a divorce or not? Mohale speaks out