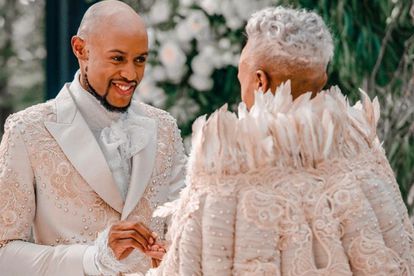 Entertainment commentator Phil Mphela reported that the True Love magazine cover that Somizi Mhlongo and his estranged husband Mohale Motaung appeared on, was the top-selling issue of 2020/2021 via a tweet on Wednesday 27 October.

The couple graced the True Love magazine cover in February this year. This was the first time a gay couple was featured on the magazine’s cover.

The cover story centred around Somizi and Mohale choosing each other and celebrating their love. The story touched on their 23-year age difference as Somizi turns 49 this year and Mohale turned 26 earlier this year. The story also covered the Rockville actor being labelled a gold digger because of the former Idols SA judge’s fame and fortune.

Mphela reported that this was the top-selling magazine for 2020/2021 in a tweet.

“MAG: Somizi & Mohale are TrueLove best sellers. The issue, Somhale were cover stars on, is True Love magazine’s top selling of 2020/21. The issue holds the distinction of being a first gay couple cover for the mag too. #KgopoloReports,” read the tweet.

However, a tweep thought this was not the right time to post the couple’s “accomplishment”.

WHY IS IT NOT THE RIGHT TIME?

The tweep was most likely referring to “Somhale” filing for divorce. In August this year, audio clips between Mohale and the producers of Living The Dream With Somizi were leaked. In the leaked audio clips Mohale claimed that the former Metro FM host physically and psychologically abused him.

“I took my keys and walked out, he took a knife. I was about to exit, so he said to me, ‘if you exit… I’m going to kill us both.’ So I took my keys and ran. He grabbed the knife and said ‘if you walk out, I’m going to stab you.’ Now I see a different person. I was sh*t scared and walked back into the house. He said ‘let’s talk.’ He cried and we moved on,” said Mohale in the leaked audio clips.

This led to Somizi having to take “time off” from Idols SA and his radio gig on Metro FM. He later announced that he was in fact unemployed.

However, Moja Love has given the media personality a “second chance” to host a new show titled Lovey Dovey.