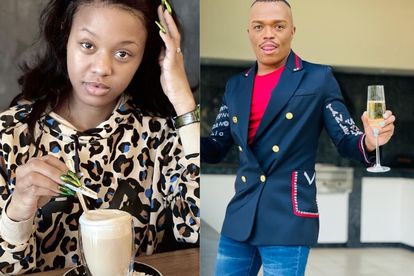 While many were enraged at Gqom artist Babes Wodumo for dragging single mothers in a video, media personality Somizi poked fun at her as he reenacted the video on his TikTok account on Saturday, 24 July.

In an odd Instagram live video, Babes Wodumo shamed single mothers saying that she does not want to be compared to them because she got married before having her son, Sponge. This followed comments made about the young mother consuming alcohol while she is breastfeeding her son.

Babes was previously seen sipping on champagne at her birthday bash when her baby bump was first revealed in March this year. In June, Babes was seen performing while heavily pregnant through DBN Gogo’s Instagram stories.

After becoming a wife to Mampintsha in April this year, Babes had a few things to get off her chest about “baby mamas”. The pair’s reality show titled Uthando Lodumo recently made its way to Showmax.

“Your baby daddy made you pregnant then left you with the baby, I wonder why you gave birth at a very young age. So I don’t want nothing to do with that,” she continued.

Babes Wodumo’s video left many confused, questioning whether she was drunk or high when making the video while others, such as Somizi found humour in the odd video.

Somizi took to TikTok to reenact the viral video of Babes Wodumo as he put on a wig, a beanie, a robe and bright coloured pegs on his hands as nails to imitate the Wololo hitmaker. He also packed on the attitude as he danced to a voice over of Babes.