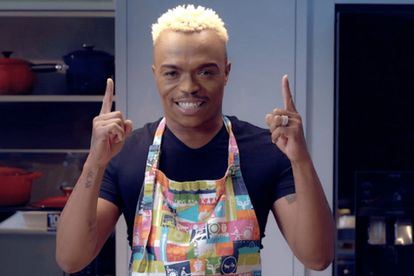 Following the release of his first cookbook, ‘Dinner at Somizi’s’, Somizi Mhlongo has teased the release of a second cookbook. Image via Twitter @ViralFeedZA

Following the release of his first cookbook, ‘Dinner at Somizi’s’, Somizi Mhlongo has teased the release of a second cookbook. Image via Twitter @ViralFeedZA

Following the success of his first cookbook, Dinner at Somizi’s – I Am Not A Chef, reality television star and home cook Somizi Mhlongo is planning to release a second cookbook. Taking to Instagram on Monday 11 July, the Idols SA judge told a fan in his Instagram comments that they could expect another cookbook soon…

Somizi’s cookbook, Dinner At Somizi’s – I Am Not A Chef, was officially released in November 2020 and since then, the reality star has been showing off some of his recipes on his Instagram page and cooking show of the same name.

Between November 2020 and January 2021, the cookbook was the highest-selling cookbook at CNA, beating out Jamie Oliver’s 7 Ways.

Taking to Instagram at the time, the 49-year-old said he aimed to break records with his first cookbook.

“I’m so proud of myself for believing in myself and released my first of many self-published books.”

Taking to Instagram on 11 July, Somizi tantalised his followers’ tastebuds with a video preparing his dinner. On the menu were prawn and tuna sandwiches with coleslaw for a crunch.

In 2021, Somizi took a break from season 17 of Idols SA last year after his estranged husband Mohale Motaung, accused him of abuse. The reality star will be back on Mzansi’s screens for season 18 of the reality show set to premiere on Sunday 17 July.

In February, he told Channel24 that it was “one of the toughest times” of his life and career.

“But we move forward and like we say: ‘Innocent until proven guilty’”.