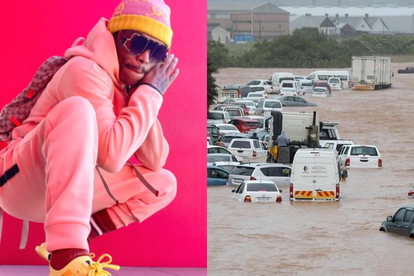 Somizi has thought of an idea to help KZN flood victims. Images via Instagram: @somizi/@simamkeleD

Somizi has thought of an idea to help KZN flood victims. Images via Instagram: @somizi/@simamkeleD

Many South Africans have expressed their concern for the people in KwaZulu-Natal whose lives have been affected by deadly floods in the area. Among those concerned is media personality Somizi Mhlongo who has also shared his thoughts on how those people can be helped.

According to Somizi, a big fundraising concert will make a big difference – especially if the right people get involved.

Somizi is one of many South African celebrities who have expressed how concerned they are about the people in KwaZulu-Natal whose lives have been turned upside down by the floods this week which have not only destroyed houses and property but have also resulted in hundreds of deaths.

Taking to his Instagram on Wednesday 13 April, Somizi expressed his sadness while sharing an idea that he thinks will definitely help KZN flood victims.

According to the Idols SA judge, KZN artists such as DJ Tira and others, should all do a massive concert at the Moses Mabhida Stadium in a bid to raise funds for the victims.

“I would like to again challenge especially Durban-based musicians, the likes of DJ Tira, who are able to organise concerts, promoters like Max to come together this week and put together a benefit concert at the stadium, Moses Mabhida.

And then all the artists from all over the country can volunteer to perform for free but tickets are sold at the gate at a cheaper price and all the proceed to go to a relief fund,” he said.

Previously Somizi pleaded with anyone who can to donate whatever they have to the flood victims who have lost a lot as a result of the natural disaster.

“I couldn’t shake off what’s happening in KZN. I have been seeing the videos on social media. My question is are we doing something about it as urgent as it is? I want to do my part and I believe everyone who is watching now is capable of doing something.

“The entire country can do something whether it’s clothing and we can all donate something towards the relief fund,” said Somizi.