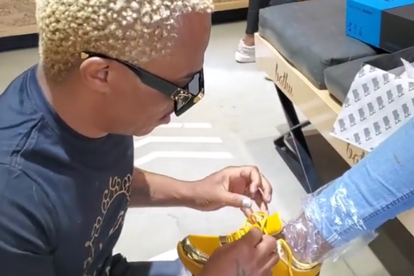 Somizi left his fans gushing over him again. Image via Instagram: @somizi

Somizi left his fans gushing over him again. Image via Instagram: @somizi

Idols SA judge Somizi Mhlongo has just got himself deeper into the hearts of his fans. The star took to Instagram to share a video of himself helping a potential customer try on a sneaker from his Bathu range. After watching the clip, the comment section of the post was filled with comments from fans who couldn’t believe how humble he is.

Somizi humbles himself for a customer

If there is one thing Somizi isn’t short of, it’s loyal fans. The media personality has managed to impress his millions of online followers after he humbly decided to help a potential customer try on one of the sneakers from his Bathu shoe collection.

Taking to Instagram on 19 March, Somgaga shared a short video of himself getting hands-on with his clients and taking to his knee as he helped one of them.

In the caption, he shared that he is always hard at work while announcing that the line has also expanded into a kiddies range.

The post received thousands of likes and comments from his fans who loved how hands-on Somizi is. Many people expressed surprise at watching a millionaire get down on his knees to put shoes on the feet of one of his fans.

“My little brother had the same, he loved them so much that we even had to bury him together with them. Same colour. You do not carry yourself like a typical celebrity l wish they can learn from you and Lerato. Ma bethi “ ezinkulu “ basho nina you gel well with random people Somizi umoya wakho ngathi kungahlala kukwandela every time .”

“I’m noticing how you like to involve kids in your work lately, it’s beautiful to watch. Says a lot about your character ❤️.”