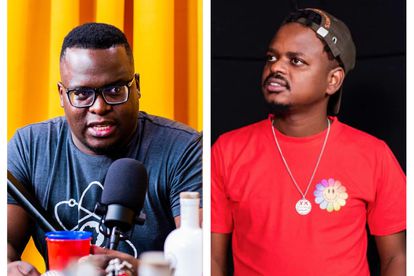 MacG has broken his silence on claims he was ‘betrayed’ by Podcast and Chill co-host Sol Phenduka who announced his Kaya FM gig this week.
Image via Facebook
@podcastwithmacg

MacG has broken his silence on claims he was ‘betrayed’ by Podcast and Chill co-host Sol Phenduka who announced his Kaya FM gig this week.
Image via Facebook
@podcastwithmacg

Sol Phenduka’s decision to accept a gig in mainstream radio – as co-host of a new Kaya FM show – has not gone down with chillers on his Podcast and Chill show with MacG.

In fact, many tweeps, including music commentator Nota Baloyi, have even accused him of being a “sell-out” to the show.

But contrary to views of those who think Sol is making a grave mistake, Mac G has pledged his full support to his friend and colleague.

Sol Phenduka’s move to Kaya FM caught many chillers by surprise, especially as both he and Mac G have previously spoken out about being “censored” on radio

Both Mac G and Sol Phenduka created the Podcast and Chill platform for this reason, after stints in YFM, 957, and 5FM respectively.

Mac G even claimed that a radio station paid an influencer R60 000 to “push propaganda” about him.

But despite’s Sol Phenduka’s Kaya FM gig alongside Dineo Ranaka, MacG is 100% behind his friend.

He said in Thursday 16 June’s Podcast and Chill episode: “Jokes aside, when you told me about it I was like dude, there’s no way you can say no to this. This is an opportunity you grab with both hands. That is me speaking as a friend of yours. Someone who’s been in the trenches with you”.

But MacG also joked about the decision after putting on his “podcast hat”. He told Sol: “We were brothers in arms, fighting radio. Ït’s like me marrying an It-girl now”.

Whilst chillers are concerned about what Sol Phenduka’s new Kaya FM show means for the podcast, he said in Thursday’s show: “Guys I’m not leaving”.

He also revealed his motivation behind accepting the radio gig.

He added: “I wanted to show people that there is another side of me, I can go on mainstream tv and conduct myself in a proper manner that’s more suitable for that platform. I’m a broadcaster more than anything”

Kaya FM has revealed that details of Sol Phenduka and Dineo Ranaka’s new show will be revealed on 1 July.