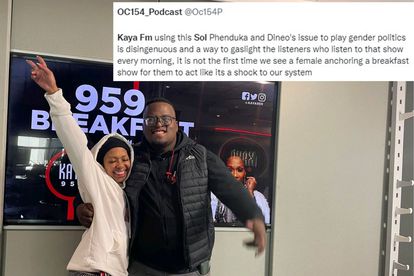 Irate listeners are threatening to boycott Kaya FM after they issued a statement on Sol Phenduka and Dineo Ranaka.
Image via Facebook
Kaya FM

Irate listeners are threatening to boycott Kaya FM after they issued a statement on Sol Phenduka and Dineo Ranaka.
Image via Facebook
Kaya FM

Kaya FM listeners have threatened to boycott the breakfast show after the station defended Dineo Ranaka – and seemingly revealed she was the “star of the show” – in light of backlash about co-host Sol Phenduka.

The Gauteng station issued a statement on Wednesday 3 July in response to social media commentary. This week saw both radio personalities trend on Twitter after listeners accused Dineo of “bullying” Sol.

Defending Dineo against Twitter users who claim she is trying to “outshine” her co-presenter, MD Sibondile Mtyali responded in a press statement to News24.  Explaining their roles, he said: “The structure of 959 Breakfast is that Dineo Ranaka is the main anchor and Sol Phenduka is the co-host and traffic reporter.

“We are aware that a female lead anchor on a breakfast show is unusual in the SA radio landscape, but we have full confidence in both Dineo and Sol’s talent and their ability to navigate the dynamics of the show.”

Kaya FM’s stance puts to bed that Dineo Ranaka and Sol Phenduka are “50/50” partners in the show.

However, Kaya FM further infuriated listers who believe that Sol Phenduka was the drawcard to the show.

Many tweeps also threatened to ditch Kaya FM altogether, after they claimed the station reduced him to a “water boy”.

@WitnessAnderson: So the news is out. Kaya FM says Sol is a co-host and a traffic presenter and Dineo is the main host of the show. l say then there’s no need to listen or watch if Sol is the water boy”

@EdwardthembaSa: “So Sol was doing his duty by being sent to McDonald’s to check the traffic?”

@Fulufhe53047517: “Sol is the breakfast himself. We are here because of him..some of us never care about radio”

@MkhonzoRSA: “Sol was hired to be turned into a mediocre co-host and weaken MacG podcast… Kaya FM played Sundowns tricks on us”

@12500Generetion: “Do you honestly think Sol Phenduka is nothing but a sliding door operator aka scabha in a taxi?”

Ai…okay, in that case then @KayaOnAir can prepare to lose some listeners cos we were tuning in for @Solphendukaa , kanti umjita is just there to laugh and be rob byrne. pic.twitter.com/7NsAP43F7C