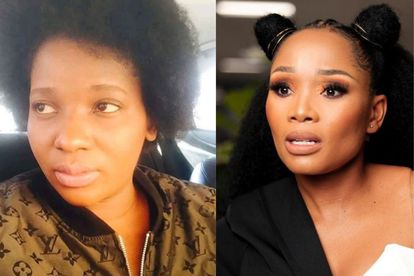 Actresses and businesswomen Dipuo Kgaphola and Innocent Sadiki are ready to welcome their babies.

Reality star and actress Innocent Sadiki left her followers guessing two days ago on Saturday 21 August when she announced that either her and/or her twin sister Millicent Mashile is pregnant.

The pair also took to their YouTube channel to confuse their followers even further by stating that Sadiki’s daughter Ntombana is going to be a big sister.

This gave their fans the impression that Sadiki is the one who is expecting and not Mashile.

Sadiki and her pastor husband, Phindulo Sadiki, welcomed their baby girl Ntobana in 2018 after moving into their new home.

Dipuo Kgaphola, who plays the role of Sister Mokarati, at Turfloop Hospital also announced her pregnancy on a since deleted Instagram post.

The actress was dressed in a baby blue mermaid dress when her family and friends threw her a baby shower last week.

Kgaphola has appeared in various TV shows, such as Generations, Ikhaya and Yalla.

She is also a businesswoman who owns a fragrance empire called D&D Fragrance and has founded the Dipuo Kgaphola Education Foundation (DKEF) in 2016.

Lehasa only gave him the 15% share to keep him quiet and be one step ahead of him.