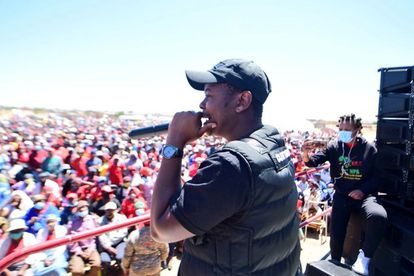 The media personalities made appearances at EFF events and appealed to South Africans to vote for Julius Malema’s political party.

The actors took their microphones, and sang for the audience who went wild when they dropped a few lines to get them into the groove.

The actors joined Lasizwe at EFF’s campaign trail in Leslie (Mpumalanga) where they entertained the masses and called on people to vote for the EFF.

The EFF has also received support from media personality, Uncle Vinny as well as former The Queen actress, Ntando Duma.

The party seems to be appealing to the youth vote and turning up the heat with its star rallies as a majority of its supporters are between the ages of 18 to 34.

With the elections slated for 1 November, EFF is holding rallies to increase supporters as the November elections draw closer.

The party has also tagged in the Mandelas to their campaign trail, as well as Ntando Dumo who used to be a major ANC (African National Congress) supporter.

The actress has shared a series of photos on her social media channels dressed in EFF berets and scarfs.

She recently (10 October) posted a picture on her Instagram account wearing an EFF scarf while campaigning with the party in the Northwest and captioned her post: