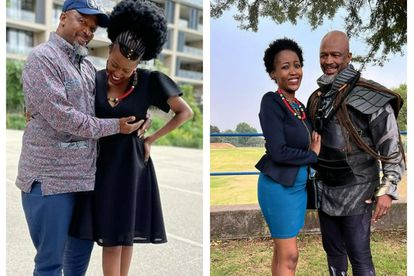 Sello Maake KaNcube has come for Makro after failing to deliver. Images via Instagram: @sellomkn

Sello Maake KaNcube has come for Makro after failing to deliver. Images via Instagram: @sellomkn

Legendary actor Sello Maake KaNcube has taken to his Facebook to share his wife’s frustration after she ordered a TV for him as a surprise but Makro has failed to deliver.

“Yesterday I heard a very interesting interpretation of how sometimes some issues relating to GBV emanate from small things, my wife went to buy a TV at Makro SA that was supposed to be my surprise

From being hurt that Makro didn’t deliver the TV yesterday as promised, she decided to tell me about it out of frustration,” Sello detailed the story.

The Skeem Saam actor added that what caught his attention was when his wife Pearl Mbewe Maake KaNcube said, “Imagine some women get given money by their husbands to go buy some things for the house and they inform their families that the appliances or whatever product for that matter will be delivered on a specific day.

“The item doesn’t get delivered and no single phone call from MAKRO! So if one is married to a bully and abusive man he will start beating you up thinking you ate his money and you are playing him for a fool or this will cause unnecessary arguments in people’s homes,” he explained.

ALSO READ: ‘My wife is what I ordered’: ‘Skeem Saam’ actor Sello on his wife

Sello added, “My take on this was, as much as we don’t really think about such things they are a huge possibility, so these companies need to have their client’s interest at heart and stop making false promises”.

‘THEY DO THIS ALL THE TIME’ – FANS SHARE EXPERIENCES

Some of Sello’s fans took to the comments section to share what they have been dealing with when it comes to Makro.

@Sean McQueen said, “True sir, it’s frustrating they did that to my wife at Lewis, she bought a kitchen set they took 9 days after we had an argument”.

@King Makhosonke Tshabalala Donga said, “Companies don’t care anymore about their clients, you only important when you still wanna buy after they hooked you and you paid abazingeni”.