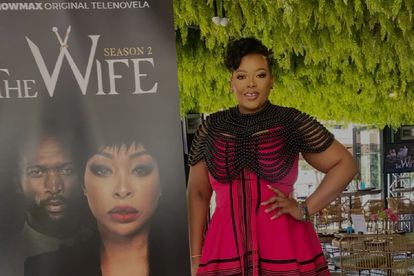 Anele Mdoda is not impressed with the casting of Gaisang K Noge as Naledi on ‘The Wife’. Image via @zintathu/Instagram

Anele Mdoda is not impressed with the casting of Gaisang K Noge as Naledi on ‘The Wife’. Image via @zintathu/Instagram

Radio and TV personality Anele Mdoda has joined viewers of Showmax series The Wife who have expressed their disappointment in the casting choice for the season 3 lead character, Naledi.

This after the much-loved and criticised drama series unveiled the actress who will be playing the wife of fan-favourite Qhawe (Kwenzo Ngcobo) on the show.

Anele’s views on the casting actually conflict with Dudu Busani-Dube’s views, who is the author of the books.

ALSO READ: ‘I like her and approve of her’: Dudu Busani on Naledi ‘The Wife’ casting

ANELE EXPLAINS WHY SHE WAS HOPING FOR A BIGGER GIRL

On Wednesday 16 March, Stained Glass finally introduced Qhawe’s love, Naledi, to viewers. The actress, whose name is Gaisang K Noge, is no stranger to the small screen as she already has a role on e.tv’s House of Zwide.

While many were expecting a chubby actress to play lead in Naledi His Love, as per the book, they were left rather disappointment to find that Noge does not fit that physical criterion.

947 breakfast host, Anele Mdoda, also took to her Twitter account on to explain why she feels the the producers of The Wife could’ve casted a “size 42 dark actress.”

“Jokes aside. It would have been nice to cast a size 42 dark actress for the role of Naledi in THE WIFE. I won’t go into a thesis but when we speak of the success of THE WIFE, we attribute it to representation and authenticity and this was a good time to be led by that.”

When one follower asked the Celebrity Game Night SA host how will raunchy scenes like the infamous Zandile (Khanyi Mbau) and Nkosana (Mondli Makhoba) scene work with a size 42, she explained that years of conditioning have led to people thinking that it’s only slender people who should have steamy scenes on TV.

“Exactly. You have been conditioned to think romantic liaisons on screen are only for slender people. That bigger people are not for lack of a better word deserving of affection. This is precisely why the author made Naledi a bigger lady. You know big people have sex in real life?”

HERE ARE SOME REACTIONS TO ANNOUNCEMENT:

ALSO READ: ‘The Wife’: Abdul Khoza reassures viewers he is not leaving the show