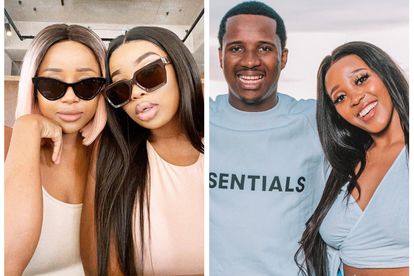 Sithelo Shozi and her sister Ze have posted cryptic social media posts referencing Andile Mpisane’s sister Sbahle and her comments made in a Twitter space.
Image via Instagram
@_sithelo/ @sbahle_mpisane

Sithelo Shozi and her sister Ze have posted cryptic social media posts referencing Andile Mpisane’s sister Sbahle and her comments made in a Twitter space.
Image via Instagram
@_sithelo/ @sbahle_mpisane

In a Twitter space earlier on Wednesday, the fitness fanatic called out the mother-of-three, accusing her of essentially exploiting the Royal AM chairman.

But Sithelo and her sister Ze did not take the attacks lying down.

Taking to their Twitter accounts, both Sithelo and Ze shaded Sbahle over her comments.

After Sbahle insinuated Sithelo lied about her abuse allegations lodged against Andile and allegedly cheated on him throughout their relationship, the latter posted a cryptic tweet that read: “Then you wonder why I try so hard to protect my kids from this”.

Sithelo deleted the tweet shortly thereafter. Also taking to Twitter to throw shade was Ze, who in a since-deleted tweet questioned Sbahle’s version of events. She tweeted: “Sengath angakhubazeka umlomo ke manje [I thought her mouth was paralysed]”.

Ze was no doubt referring to Sbahle’s 2018 car crash which left her temporarily paralysed and suffering from amnesia.

Sithelo’s younger sibling also retweeted a post that read: “Sbahle remembers things now?” and “She forgot to remember how to reason”.

On her Instagram Stories, Ze posted a clip of a tabloid talk show whose host told his guest: “You are the father” – seemingly referring to Andile questioning his paternity over his two children with Sithelo.

ALSO READ: Sbahle Mpisane admits to LYING about amnesia being behind Khune split

SBAHLE CLAPS BACK AT CRITICS

Following Sithelo and Ze’s shady posts, Sbahle also clapped back. On her Instagram Stories, she shared a message to her critics who mocked her accident

“Some people forget that what happened to me, can happen TEN times worse to them”.