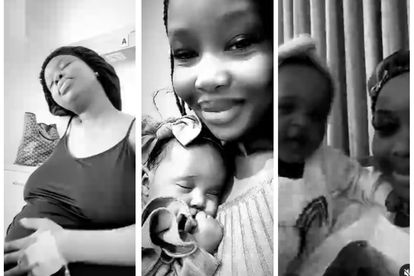 Whilst Andile Mpisane has another family to call his own, his ex-girlfriend Sithelo Shozi was raising their baby girl Likuwe “Coco” alone.

That’s the impression the mom-of-three gives after sharing a peek at her baby’s first year.

Despite the paternity drama surrounding them, Sithelo and Andile share two daughters together: Florence “Flo” and Coco.The Royal AM Chairperson also has baby girl Miaandy with his new wife Tamia Mpisane. Sithelo also has another child – a son Makhosini – with ex-partner Makhosini Maseko.

She also shared a clip of her first year with Coco, which she captioned: “365 days”.

In the video montage, Sithelo gives us a glimpse of her labour and delivery as well as little Coco bonding with her mom, siblings, and her maternal grandmother. But glaringly absent from the video was baby daddy Andile Mpisane and his own mother Shauwn “MaMkhize”.

According to previous reports by the Durban DJ, Andile dumped her when baby Coco was just three months old. Two months later, Andile wed Tamia in a shotgun wedding, which resulted in the birth of their daughter Miaandy a few months later.

ALSO READ: ‘Can’t love a child and not its mom’: MaMkhize dragged over birthday post

Earlier this month, Andile Mpisane shocked South Africans after he demanded a paternity test through his lawyers on his two daughters with Sithelo Shozi. This, after he accused his muso ex of being unfaithful in their relationship

But with Sithelo’s reveal of baby Coco this week on her first birthday, tweeps have rubbished Andile’s request, claiming that both girls have a “striking resemblance” to him and his family.

And despite questioning if he is indeed their dad, Andile Mpisane took to his own Instagram account to publicly wish his baby girl a happy birthday.

He captioned a clip of the one-year-old: “Happy birthday Coco my beautiful daughter”

Andile’s mom MaMkhize also caught flack for her Instagram post, with followers telling her to “apologise” for “mistreating” Sithelo Shozi.