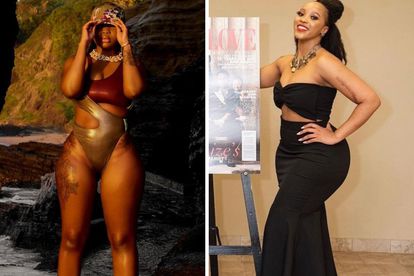 Whilst Sithelo Shozi has shown off her new body courtesy of a ‘mommy makeover’, Sbahle Mpisane is giving fans a glimpse of her own famous figure.
Image via Instagram
@_sithelo/@sbahle_mpisane

Whilst Sithelo Shozi has shown off her new body courtesy of a ‘mommy makeover’, Sbahle Mpisane is giving fans a glimpse of her own famous figure.
Image via Instagram
@_sithelo/@sbahle_mpisane

Sithelo Shozi – the ex-girlfriend of Andile Mpisane- has made no secret of her quest to undergo plastic surgery, including a Brazilian butt lift (BBL). But on the flip side, Andile’s sister Sbahle Mpisane has claimed her famous curves are a credit to hours in the gym

Whilst Sithelo shared pics of her new figure, courtesy of a Turkish plastic surgeon, Sbahle showed off a sexy workout.

Taking to her Instagram Stories, Sithelo Shozi revealed that she had undergone a “mommy makeover” in Turkey. The mom-of-three claimed her aim was to be transparent with her followers:

“I wish we’d retract the surgery stigma we seem to pass on. There’s absolutely nothing wrong with giving yourself a makeover, it’s each to their own when it comes to such after three children. This was the best decision and best reward I could’ve given myself.

The social media star added that her “hip dips” were her “biggest worry”.

The Durban DJ also shared pics of her BBL, which revealed graphic results. Prior to her plastic surgery, the entertainer also had her teeth done in Turkey last week.

ALSO READ: ‘What about abusing a teen boy?’: Sithelo faces backlash over petition

Sithelo’s surgery comes days after she shared pics of herself posing in an Ivy Park swimsuit.

And tweeps are living Sithelo’s honesty about plastic surgery too.

@modise___: “I am such a fan of Sithelo. Not deceiving people with waist trainers and shakes. I live for her right now”

@Rivoningo_C: “Good for her. If you can afford it, just buy the body you want actually. The results already look nice”

@InnoInkosazane: “Just wish all the influencers could just be as honest as her and stop selling us lies about gym/diet”

HAS SBAHLE MPISANE HAD A BBL?

Meanwhile, the sister of Sithelo’s ex has also sparked conversation around her famous figure .

But many followers are convinced that Sbahle Mpisane “bought” her body

@OgCheslyn: “Her BBL is finally healed”

@Giryt3: “Did she buy the body? Asking for my girlfriend”

So she bought that body or …?
Asking for a friend ???? pic.twitter.com/DNpgtv93wX