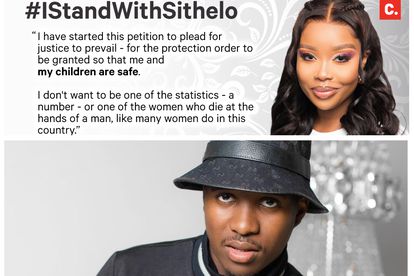 Sithelo Shozi has started a petition to be granted a permanent restraining order against ex-boyfriend Andile Mpisane.
Image via Instagram
@_sithelo
@andilempisane10

Sithelo Shozi has started a petition to be granted a permanent restraining order against ex-boyfriend Andile Mpisane.
Image via Instagram
@_sithelo
@andilempisane10

Sithelo Shozi has started a petition for a protection order against baby daddy Andile Mpisane to become permanent, citing the latter has threatened her life on multiple occasions.

In it, she revealed that the Royal AM chairperson had continued to harass her, despite their split last year

In June Sithelo shared details of an alleged abusive relationship at the hands of Andile Mpisane, whom she shares two daughters with.

ALSO READ: Sithelo Shozi partners with Women For Change: ‘Let nobody silence you’

SITHELO SHOZI: ‘I HAVE BEEN ABUSED AND INTIMIDATED’

In her Change.org petition, Sithelo gave the public insight into her interaction with Andile Mpisane, whom she did not name.

She shared: “I am a mother of 1 boy and two baby girls, and I have been abused physically and emotionally, and am constantly intimidated by The father of my children.

“I was in a two-and-a-half-year relationship with the father of my children, and we have two beautiful daughters and a son together. While in the relationship I was beaten mercilessly and consistently. I did the best I could and stayed silent, but now I feel that I have been through enough. I feel that I have been abused and pushed far enough by the father of my children”.

Sithelo previously revealed that Andile Mpisane often beat her in front of his family and friends.

She continued: “The father of my children beat me to a pulp while I was pregnant with our last child, and I had to wait 3 days to find out if my baby would survive.

“The last draw was when the father of the children started questioning the paternity of our last child – after everything that I silently withstood. My children are far too young to live with a mother who is being bullied, intimidated, and still facing abuse. I am a human being too and this kind of abuse has gone on for too long. I want freedom and justice”.

Sithelo also revealed that she was living in fear.

She added: “The father of my child still calls threatening to kill me. Even though I’ve moved out of our joint home with the children, he has managed to find out where we now live”.

‘I DON’T WANT TO BE A STATISTIC’

Sithelo stated that she had filed for a protection order against Andile to be made permanent.

The hearing for the protection order will take place on 31 October 2022 at the Point Waterfront Magistrate’s Court.

She continued: “I have started this petition to plead for justice to prevail; for the protection order to be granted so that I and my children are safe.

“Whilst this will put me against a powerful, well-connected, and wealthy individual, I am also a person with rights and my children deserve a fighting chance. I deserve a chance to be free too; to have the justice system of South Africa protect a woman and a mother; to protect me.

“I don’t want to be one of the statistics or one of the women who die at the hands of a man, as many women do in this country. I don’t want cries for ‘Justice for Sithelo’ when my body lies dead and cold”.

She added: “I want to live. I need protection”.