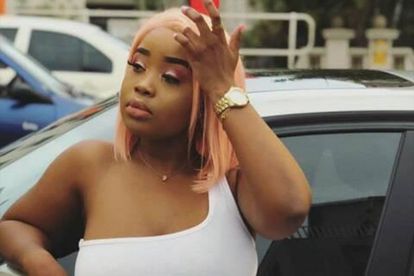 Sithelo Shozi has claimed a previous charge of defamation against her ex-boyfriend Andile Mpisane was dismissed, going as far as to say “it was never investigated”.

The DJ – who this week accused her baby daddy of abusing her throughout their relationship – spoke about her previous unsuccessful engagement with the law.

‘DISMISSED IN COURT…I DON’T UNDERSTAND WHY’

Speaking to Daily Sun, Sithelo revealed why she did not charge Andile Mpisane with assault earlier.

She said: “I only opened a case of defamation at Durban Central. I didn’t open a case of assault because I was trying to protect his image”.

Of her previous charges, Sithelo said she was only given an update by police this week. She continued: “The police told me the case was dismissed in court. I don’t understand why because I was never informed…I get the feeling it was never investigated”.

Following her bombshell revelations, Sithelo claims she is planning on now filing charges of assault against Andile Mpisane.

She added to the publication: “I don’t know what’s going to happen after this, but I am planning to open a case of assault. I am communicating with my lawyer”.

Meanwhile, in police documents that went viral on Thursday, it was revealed that Andile Mpisane previously applied for a protection order against Sithelo.

According to the document, it was filed on 17 December – which happened to be the wedding day for Andile and his wife Tamia. Part of the protection order read: “Sithelo who is my ex-girlfriend has been abusive to me since we broke up”.

The Royal AM chairperson claims Sithelo allegedly assaulted him on several occasions, including once shattering his windscreen. He added: “She punched me, kicked me. She is a violent and aggressive person. Phoning my friends and family, degrading me, tarnishing my name…calling me f*king b*stard”.

Andile added that he wanted Sithelo to “stay away, stop harassing, stalking me”.