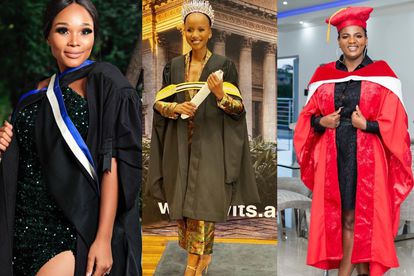 Miss South Africa Shudu Musida, Royal AM owner Shauwn “MaMkhize” Mkhize and other celebrities have graduated this year despite the strain of the pandemic.

Here is a look at five celebrities that graduated this year, some of which were marred by controversy.

Miss South Africa 2020 Shudu Musida graduated with her honours degree in International Relations at the University of Witwatersrand (Wits). Shudu’s graduation stirred up quite the controversy because she posted a video of herself walking down an empty room at the university.

Vice chancellor Prof Zeblon Vilakazi appeared to hand her what appeared to be her degree so it looked like she had a traditional graduation. This sparked an outrage on Twitter because Tweeps believed it was unfair treatment.

Wits thereafter released a statement saying that Shudu graduated virtually just like all the other students.

“Miss SA Shudufhadzo Musida took part online, from her apartment in Sandton, in the University of Witwatersrand’s virtual ceremony, along with all students who were graduating,” said the organisation in a statement.

2. MAMKHIZE GRADUATES WITH A DOCTORATE – FROM AN UNREGISTERED COLLEGE

MaMkhize announced that she was honored with a doctorate degree on Saturday 27 November.

MaMkhize insisted that she wants to be called “Dr Shauwn Makhize” now but the college that awarded her the degree, was not registered with the Department of Higher Education.

“An honours degree graduate🙌🏾🙏🏽. What a journey it has been. I’m grateful to God for his faithfulness in my life. It doesn’t matter how long it takes or when it happens, God’s timing is always perfect 👌🏾,” she captioned the post.

Radio personality Mapaseka Mokwele finished her Master’s in 2020 but chose to wait until she could walk the stage to graduate this year, eventually she settled for a virtual graduation.

“This grad on its own has been quite a journey… finished this Masters late 2019/ early 2020. Enter COVID… Chose not to graduate virtually because I wanted to walk across that stage, I worked hard for this and wanted to celebrate fully! Soon gave up on that dream and thought OK fine let’s just do it,” she captioned the post.

Actor Cedric Fourie graduated with his diploma in management practice at the University of Cape Town (UCT) this year.

‘We’re in hell’: Anele on why she’s NOT celebrating Women’s Day