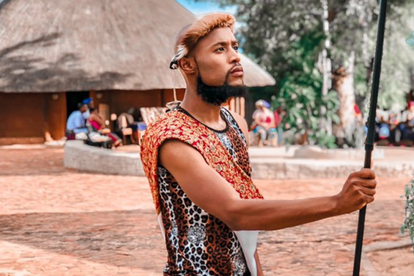 Mohale Motaung is hellbent on living his best life but it seems not everyone wants him to. The media personality and estranged husband of TV and radio’s Somizi Mhlongo headed online to share a scary story. According to him, while out with a friend, someone attempted to spike his drink more than once.

Mohale’s life may be in danger

We’ve heard many horror stories of people being abused or kidnapped after having their drinks spiked by creeps and weirdos in clubs and bars. Mohale Motaung just had firsthand experience with drink spiking but thanks to his alert friend, he was able to stay safe.

Taking to his Twitter page, Mohale shared the scary story of how he and a friend caught the man who tried to spike his drink not once but twice. According to the tweet, the two of them were enjoying some time out when the scary incident occurred.

“Last night someone tried to spike my drink TWICE, Thank God @uPeace_ was there and saw this guy. 😳😨

We didn’t even know what to do after we caught him because we were just in so much disbelief. People are weird! ,” he wrote in the tweet.

Many of Mohale’s supporters were truly shook by the tweet and quickly wished him well in the comment section. Others wondered whether or not this is the first of many attempts at harming him. A few people even blamed Somizi for the harrowing incident.

“He was sent by someone who was once close to your heart.”

“Next time your drink must never leave your hand unless you finish drinking it cos even close people to us do spike your drink dont trust, anyone, out there.”

Meanwhile, Somizi is seemingly back on the come-up and has already secured himself quite a few gigs to keep him busy and monied this December holidays.