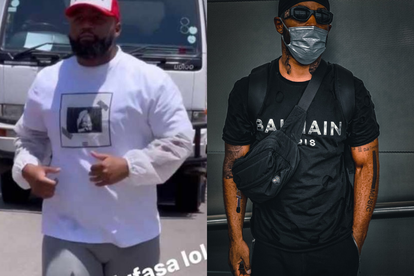 Kaybee trolled Cassper over the size of his manhood. Images via Twitter: @casspernyovest/@PrinceKaybee

Kaybee trolled Cassper over the size of his manhood. Images via Twitter: @casspernyovest/@PrinceKaybee

South African musicians Cassper Nyovest and Prince Kaybee have been at each other’s throats for years now. The pair even went as far as to agree to a boxing match. The match didn’t happen but their anger towards each other remains.

They have once again found themselves in a heated argument after Kaybee laughed at the size of Cassper’s manhood.

Prince Kaybee takes a dig at Cassper over the size of his 4-5!

Baby girl rapper Cassper Nyovest was just minding his business when he headed online to share a clip of himself training ahead of his boxing match with musician NaakMusiq.

The clip caught the attention of his long-time enemy Prince Kaybee who could not help but take a jab at Cassper over the size of his manhood.

“For someone that keeps on talking about b*lls this is shocking,” Prince Kaybee wrote.

This obviously did not sit well with Cassper who wasted no time clapping back at the Fetch Your Life artist. In his response, Cass accused Kaybee of not putting his money where his mouth is and face him in a boxing ring.

ALSO READ: ‘F*ck, this is too much’: Cassper speaks out following Patrick Shai saga

He also slammed Kaybee for talking about his manhood:

“Prince Kaybee is a b*tch!! He won’t ever step in the ring. Kabelo ke see, that’s why a tsamaya a bua ka di tool tsa mauti (he goes around talking about other guys’ manhood). Lol… He is a sweet lil b***h and he doesn’t have the balls to step in the ring with a real man like me. The day he grows a pair, I’ll be waiting!!!”

“It’s a battle of balls today, he said you don’t have balls literally and you say he doesn’t have balls figuratively. I wonder whose court has a ball.”

“But he already showed everyone his pair and bathi it’s bigger than yours.”