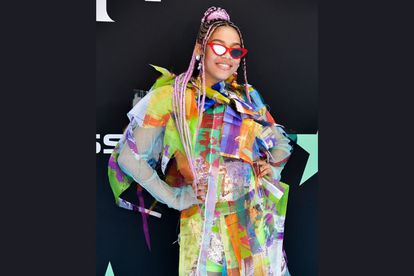 A ‘village girl in Times Square’

Madjozi’, who was nominated for a BET Award last year in the category of Best International Artist, took to Twitter to share the news saying she is a “village girl in Times Square”.

Many of her fans on Twitter expressed their joy at seeing a South African on a billboard in Time Square.

“We’re so proud of you for putting us on the map,” one Twitter user commented. “You inspire me everyday Maya,” said another.

According to ZAlebs, her feature in Time Square comes after she recently made the list as one of the 21 artists joining the YouTube Black Voices Class of 2021.

As part of their packages, the selected artists will receive support from YouTube as well as seed funding invested into the development of their channels and participate in training and networking programs focused on production, fan engagement, and wellbeing.

“I made the YouTube Black Voices class of 2021! along with some super incredible artists from all around the world! What an honour,” she expressed her joy at the time. “Whether it’s asserting my independence, whether it’s talking about love or lost love, I want to be remembered as someone who made it cool to be African and cool to be yourself.”

At the end of 2019 after two videos of WWE veteran wrestler, John Cena dancing to a track by Madjozi on the Ellen de Generes Show and him surprising her on Kelly Clarkson’s programme went viral, Madjozi’s influence had begun to quickly infiltrate pop culture and closer to home, her hairstyle had become the most requested of 2019.

“Braids were always a natural option for me because they allow me to do the things that I love doing. I can swim and play sport, these are things that my followers know I love doing. I want to create a hairstyle that young black girls can have that is affordable and let’s them live their best life,” she told Top Billing.

With a combined following of 1 million on social media, Madjozi said she has a small team behind her that is quietly and effectively building her brand.

According to Times Live, other SA celebs have had their faces featured on an international billboard. Earlier this year, DJ Black Coffee had his face lighting city centres in New York and Toronto merely hours after the release of his now-hit album Subconsciously.