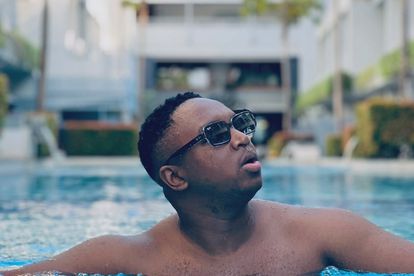 DJ Shimza has defended his tweets after being accused of ‘exploiting creatives’.
Image via Twitter
@shimza01

DJ Shimza has defended his tweets after being accused of ‘exploiting creatives’.
Image via Twitter
@shimza01

DJ Shimza may be a maestro on the turntables, but when it comes to Twitter, he often gets it wrong.

But according to the muso and entrepreneur, this is by “Twitter standards” only.

After trending on the timeline earlier this year over claims that he does not wash his own socks or underwear, Shimza struck again with another post that offended his followers.

It all started on Tuesday 26 April when Shimza asked interested graphic designers to send him a pitch of their work.

He tweeted: “Graphic design Twitter, I’m looking at changing my logo, please send me design suggestions for me to check out”.

@Gjing_superman: “Hi Shimza, I’m looking to host an event and need a DJ. Please come to DD at my girlfriend’s graduation party so I can decide if I want to hire you. Thanks

@@nickjackson: ”DJ Twitter, I’m looking at having a party, please send me song mixes for me to listen to”

@Rocksville_G: “Architects, I want to build myself a very nice house. Please send me floor plans and elevations for suggestions”

@mswendyt: “This is not how to do it. Please value creative talent”

@Gramsy_mat: “You think graphic designing is achar, where you go around testing before you decide which one you want to buy”

@papizwane2: “Come on bro. You know that’s not how it works. Next thing a similar idea to what was submitted appears a month down the line”

@Thamwerii: “So South Africans have this madness too, ask for portfolios not exploiting creatives. Shimza thinks he is so big so he should get things done for free. Lmfao”

DID TWEEPS MISS THE POINT?

Following the Twitter backlash, DJ Shimza sought to set the record straight on what he really tried to communicate

He said in response to one tweep: “I’m saying to them ‘here’s an opportunity to make money! If I like your design I’ll pay for it’. I was not forcing anyone to do any work for free”.

Shimza also posted a video claiming that his tweet was misunderstood and that he was rather trying to encourage professionals to use their initiative to get noticed by prospective employers.

Shimza also brought in the example of a lead Drip Footwear designer, who bombarded CEO Lekau Sehoana with design samples before working with him.

He added: “Imagine if he waited to be paid based on ‘Twitter standards’”.

And others agreed with Shimza’s sentiments.

@TheeMalebza: “As a creative (more especially an upcoming creative) you need to keep selling yourself and avoid the Twitter mentally or else you’ll hardly get these gigs”

@PriscillaNgwe12: “If I had not used this concept I would not be a CA right now. I did some free work for someone who showed me a favour and asked me what I wanted to do in life. I basically traded my fees being paid for work… the rest is history”