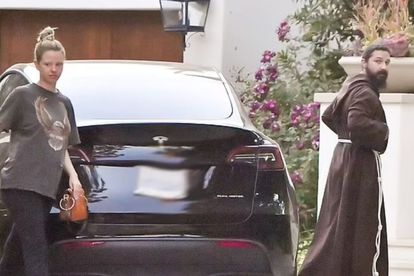 Shia LaBeouf in a monk outfit with girlfriend Mia Goth in tow in Los Angeles. Image via Twitter @arabeIIaessiedu

Shia LaBeouf in a monk outfit with girlfriend Mia Goth in tow in Los Angeles. Image via Twitter @arabeIIaessiedu

American actor Shia LaBeouf has been out of the spotlight after being accused of being physically abusive towards his ex-girlfriend British musician FKA twigs.

LaBeouf is known for going to extremes to prepare for his movie roles, scarring his face and having a tooth pulled to get in character. And it seems he most certainly got into character for his upcoming role in indie filmmaker Abel Ferrara’s new film about  Italian Saint Padre Pio as the actor stepped out in Los Angeles dressed up as a Capuchin monk.

LaBeouf secured his role as Padre Pio, a monk from Puglia, in August this year. The 35-year-old was spotted outside his home saying goodbye to his on-again off-again partner Mia Goth in Los Angeles before heading to the Los Angeles International Airport (LAX).

LaBeouf was wearing a brown robe and brown sandals. It is reported that rosary beads were also hanging from his pocket.

LaBeouf reportedly spent a few days in mid-August at a Capuchin monastery in Northern California as he prepares to star in the film biography of Padre Pio, the mystic Capuchin monk.

A release date for the movie in which Willem Dafoe will co-star has not been announced.

TMZ reported on 14 November that Shia LaBeouf and British actress Mia Goth may be expecting a child together. The two were spotted at a Chuck E Cheese restaurant where Goth looked “very pregnant”, according to the article.

The publication reached out to LeBeouf’s camp for a response but they were mum on the news.

Shia LaBeouf and FKA twigs met on the set of Honey Boy in 2018. The two began seeing each other romantically after filming for the movie wrapped.

In 2019, it was reported that LaBeouf and the British musician were in a car driving towards Los Angeles when the actor threatened to crash the car until twigs professed her love for him.

FKA twigs also claimed that the Hollywood actor transmitted a sexually transmitted disease to her and accused him of being physically abusive towards him.

The musician filed a lawsuit against LaBeouf on 11 December 2020 which he responded to saying: “I’m not in any position to tell anyone how my behavior made them feel.”

“I have been abusive to myself and everyone around me for years. I have a history of hurting the people closest to me. I’m ashamed of that history and am sorry to those I hurt.”