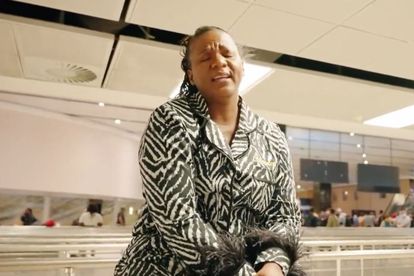 Shauwn Mkhize had the lucky opportunity to watch the AFCON finale over the weekend in Cameroon. But instead of a dream come true, her journey there became a living nightmare.

The Royal AM boss documented her woes in travelling to the African country via airline Ethiopian Airlines. But her flight was anything but smooth and the star was forced to miss the coveted match.

“All roads lead to Cameroon” she said excitedly in a post about her pre-flight plans. The first lady of Royal AM football club even promised to back Egypt, who sadly lost the match to Senegal.

The flight was delayed and there was an added mix-up of luggage.

Shauwn Mkhize would be seen holding back tears as she said in a video clip: “I’m sitting here in desperation of finding my bag. Nobody is saying anything. These people are speaking their language”.

Seven hours later and Shauwn Mkhize was no closer to Cameroon.

She added: “They were going to fix the aircraft and we were supposed to board the same aircraft. Mina I refused…I’m coming home.

Shauwn Mkhize posted the clip on Instagram on Sunday 7 February with the caption: “Bad movie /wrong turn. The experience that I was looking forward to was just turned down like that. Airbus had load shedding and they wanted to fix it and put us back on it. ME I REFUSE. So we are all going to watch the finals together on TV, sorry @royalam_fc for letting you down, my first time with @ethopianairlines and the last cause I will never use them again”.