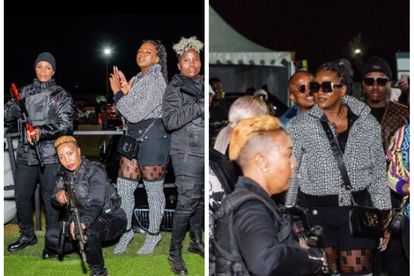 Days after being accused of abusing his ex-girlfriend Sithelo Shozi, Andile Mpisane, and his mother Shauwn “MaMkhize” enjoyed a night out on the town together

Thee mother and son duo – who partied in Kwaggafontein on Saturday night – were closely guarded by armed security.

Earlier this week, Sithelo shared pics and clips of what she claims was “evidence” that the Royal AM chairperson had abused her throughout and after their relationship.

ALSO READ: ANC Women’s League backs Sithelo – what does this mean for MaMkhize?

MAMKHIZE AND SON PARTY WITH BEEFED UP SECURITY

Taking to her Instagram account, MaMkhize showed off their night out at the Ntosifiso Garden in Kwaggafontein in Mpumalanga.

The reality TV star and businesswoman were joined by a VIP entourage, including socialite Kefilwe Mabote and businessman Bafana Sindane. Rapper Cassper Nyovest also performed on stage as part of the night’s entertainment

Making sure no-one messed with MaMkhize or Andile were heavily armed guards.

Both MaMkhize and Andile showed up in some of the priciest and trendiest threads – the Royal AM boss wore a Fendi jacket and matching boots, whilst her son wore a Louis Vuitton leather jacket, shades, and a hat.

Meanwhile, MaMkhize’s son is reportedly demanding a paternity test on his two children with Sithelo. According to Sunday World, Andile wants Sithelo to “prove” the is the father of their two daughters.

In the letter – from Andile’s legal team – the rapper also accuses Sithelo of being unfaithful to him during their relationship. It read in art: “Our client has in recent past requested that you both take paternity (DNA) tests in respect of Baby Flo and Baby Coco to lay to rest the old rumours of infidelity on your part during the time when the kids were conceived, and instead of addressing our client’s genuine request, you opted to divert attention from the real issues at hand by throwing up allegations of abuse against our client”.

It continued: “To that end, our client will not be distracted by your sideshows and has secured an appointment with the laboratory to perform the aforesaid tests on the 11th or the 13th of July 2022…kindly refrain from your continued attacks and insults on our client’s mother and direct any communication to our offices.”

Electricity crisis: Ramaphosa to announce emergency energy package by ‘end of next week’