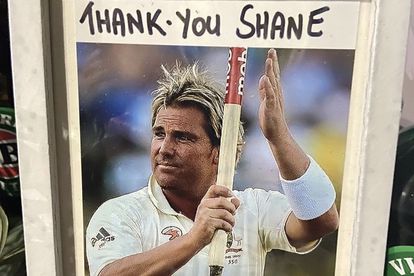 Australian great Shane Warne was honoured with a state funeral at the Melbourne Cricket Ground. Photo: via Twitter @FerrierSteph

Australian great Shane Warne was honoured with a state funeral at the Melbourne Cricket Ground. Photo: via Twitter @FerrierSteph

When the “King of Spin” attended the unveiling of his likeness outside his beloved Melbourne Cricket Ground more than a decade ago, he quipped that the “wonderful” result made the “about four hours” the sculptor had spent measuring between his nose and ears worthwhile.

But joking aside, Warne said he relished the idea that the statue would be a future reference point – a place for ordinary Australians to come together.

“It’s a pretty amazing walk down to the MCG for whatever it is you’re doing,” he said. “So to have a place here where people can meet and say ‘I’ll meet you at the Shane Warne statue’ will be nice.”

Now, on one damp Saturday morning a decade later, fans arranged to meet “at the Shane Warne statue” to mark his untimely death aged 52 and join in their shared grief.

“I’m not even a massive cricket person,” said John Haddad “but I’ve met him before and he’s not much different in age. It hits home.”

For much of the last 30 years, Warne the man has been a reference point that brought Australians together.

From his 1992 Test debut against India to his incisive commentary – now as much a part of the Australian summer’s soundscape as kids laughing on the beach or the click of the bat on ball.

In the time in between, he captured the imagination of countless backyard cricketers and set the sporting world on fire.

“It was pretty devastating to lose a childhood hero,” said Andy Smith, who came to the MCG to put down a bouquet and pay his respects.

“Everyone was here as a kid, and watching the cricket shows, especially the lunch break shows, where he would come out and show his bowling technique. It was always amazing to watch.”

“He was a hero for a lot of kids I think,” said Smith, who particularly recalled witnessing Warne’s landmark 700th wicket and his retirement.

Most Australians of a certain age particularly remember where they were for Warne’s “Ball of the Century” against England’s Mike Gatting – a delivery so special, so befuddling it has been the subject of a scientific paper.

“I was in China at the time and watching TV and when they showed that clip,” said Chris Morrow.

“Here I was in the middle of Qingdao going ‘whoop, whoop, whoop’ it was the greatest moment.”

With a friend he wanted to come to the MCG to pay his respects to cricket’s rock star – famed for his hard-charging life off-field as much as his prowess on it.

They laid down a few items beloved by Warne – a “meat pie from a service station, and a packet of Winfield Blue (cigarettes), and half a dozen VBs (beers).”