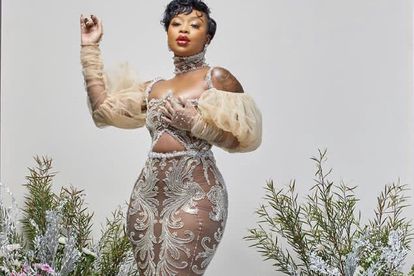 DJ and influencer, Sithelo Shozi seems to have won back the hearts of many Twitter users after her glitzy dress at the Durban July at the weekend.

The mom-of-three, who shares two of those children with musician and footballer Andile Mpisane, has received a lot of praise on Twitter — prompting some netizens to ask if “she is no longer a predator”.

The fashion extravaganza that is the Durban July came with a lot of hits and misses, as it always does. Back after a two-year hiatus due to the COVID-19 pandemic, Mzansi’s stars put their best foot forward at the Greyville race course under the theme “show me the honey”.

Among the personalities who seemed to have stuck to the theme is Sithelo, whose glamorous dress was breathtaking and tweeps hyped her up for it. Some even labelled her a ‘fashion god’ as she trended all weekend.

‘IS SHE NO LONGER A PREDATOR?’

However, the praises Sithelo was getting were questioned by some tweeps as they reminded everyone that the musician is an alleged predator and was ultimately cancelled for her actions.

Dubbed “R Stelly” on social media, a portmanteau of R Kelly and Sithelo, Sithelo’s relationship with Andile Mpisane came under scrutiny in 2021 when she officially announced it. At the time, Sithelo was 27 years old, while Andile was 20. However, ZAlebs reported that the pair had gotten together when Andile was 17 years old.

When the relationship was made official, the ex-couple had already had their first child. They later had another one in 2021.

As a result of their age gap and Andile’s age when they started dating, Twitter unleashed its wrath on Sithelo, labelling her a sexual predator and accusing her of grooming her baby daddy. Although the pair is no longer together as the Royal AM Football Club chairman is now married to Tamia Louw who gave birth to their baby girl this year, tweeps had still somewhat “cancelled” Sithelo until the Durban July.