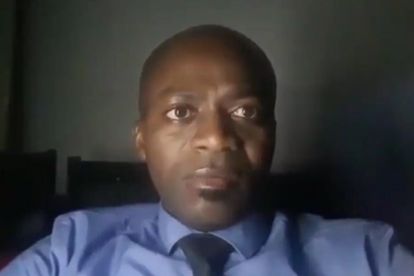 The brother of Senzo Meyiwa claims he was threatened by police investigating the murder case.
Image via Twitter
@MusaKhawula

The brother of Senzo Meyiwa claims he was threatened by police investigating the murder case.
Image via Twitter
@MusaKhawula

Senzo Meyiwa’s brother Sifiso is on a mission to find the truth of who murdered his soccer star sibling, and not even threats allegedly from the police, will not stop him.

The Durban man appeared in the recent Netflix documentary Senzo Meyiwa: Murder of a Soccer Star. In it, he questions investigations by police, including the arrest of five men suspected of killing Senzo.

Now Sifiso has revealed that he was on the receiving end of harassment after he made a “discovery” in his brother’s murder case.

WHO IS SIFISO MEYIWA?

Sifiso Meyiwa is one of seven siblings born to Sam and Irene Meyiwa of Umlazi, Durban.

Sadly, Sifiso is the last remaining brother alive – Senzo Meyiwa was gunned down in Vosloorus on 26 OCtober 2014 at the home of the mother of his girlfriend Kelly Khumalo. Senzo’s twin brother Siyabonga tragically died as a young boy after drowning during a trip to a KZN beach.

Sifiso Meyiwa has been vocal about what he believes transpired on the night Senzo was shot and killed. During that fateful night, Senzo and Kelly were joined by her mother Ntombi, sister Zandie, and her then-boyfriend Longwe Twala. Senzo’s two friends Tumelo Madlala and Mthokozisi Thwala as well as Kelly’s two children Christian and Thingo were also present.

In the Netflix documentary, Sifiso boldly claims that Longwe Twala, one of seven adults present in the Vosloroos home, is behind the murder.

He said: “All the statements claim that thugs came into the house. Those statements are lies. The truth is Senzo was shot breaking up a fight between Longwe and Zandi. Longwe had a gun, and a shot went off, by mistake”.

Sifiso also claimed that police had wrongly arrested and charged the five men who are currently standing trial for murder.

He said outside court in November 2021: “We were on the same page with the Minister [Bheki Cele] on who commited the killing. He previously agreed that these suspects have nothing to do with the murder. All of a sudden he is saying it’s someone else,” Sifiso Meyiwa said.

“The South African public will now lose trust in the government if this wrong accusation continues. The family and the minister knows who killed my brother. We all agreed on who did it. I don’t want to lie.”

In a video that has gone viral on social media this week, Sifiso Meyiwa claimed that he was on the receiving end of harassment by police.

He says of the police investigating Senzo Meyiwa’s murder: “I just want the nation to know that these people who are investigating my brother’s case, one of them called me on 29 March.

“They are trying to threaten me because of something I discovered in the case. They don’t know that the word ‘threaten’ does not exist in my world. Because I am an ambassador of the kingdom of God. I am walking with God.

“They are afraid of what is going to happen in court, they are going to be embarrassed”.