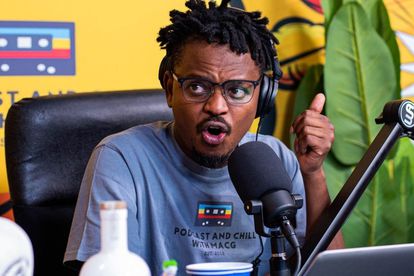 MacG and Podcast and Chill weigh in on Senzo Meyiwa’s murder.
Image via Facebook
PodcastwithMacG

MacG and Podcast and Chill weigh in on Senzo Meyiwa’s murder.
Image via Facebook
PodcastwithMacG

MacG and his Podcast and Chill team have an opinion about everything, including who they think killed Senzo Meyiwa.

On Monday 18 April, the popular podcast sat down to discuss and array of topics, one of them being the Netflix documentary about the soccer star and murder trial which resumes this week.

Describing it as a “rollercoaster of emotions”, MacG, Sol Phenduka and Ghost Lady shared their views on Senzo Meyiwa: Murder of a Soccer Star.

Senzo Meyiwa was shot and killed on 26 October 2014. The Bafana Bafana coach was at the home of the mother of his girlfriend Kelly Khumalo in Vosloorus. At the time of his death, there were seven people whom Senzo knew.

However those present in the home insist that Senzo was killed in a botched home invasion. Currently five men are on trial for what police believe was a “hit” on Senzo.

‘HE COVERED UP THE WHOLE THING’

One of the many theories at play during the documentary and on social media is that singer Longwe Twala, who was at the time dating Kelly’s sister Zandie, “accidentally” shot and killed Senzo.

Kelly, her sister, and their mom as well as Senzo and Longwe were at home during the shooting. Joining them were Senzo’s two friends Tumelo Madlala and Mthokozisi Thwala,

Many tweeps believe that those present during the shooting covered-up for Longwe.

And MacG agrees. Discussing his theory, he said: “Obviously because it was Chicco’s son, he covered up the whole thing. That’s why no-one knows till this day what went on”.

Sol added: “Chicco’s rich, he’s a businessman and he’s got connections”, alluding to the theory that the music producer bought his son’s freedom.

On whether they think Senzo’s murder would ever be solved, the Podcast and Chill team were not so confident.

Sol claimed: “It’s been so long, it’s buried by I don’t know by who. It’s distorted and probably been tampered with anyway”.

For the past several years since Senzo Meyiwa’s death, Longwe Twala has maintained a low profile.

Apart from an interview with Mo Flava on Metro FM in 2018, the former child star has chosen to live his life out of the spotlight.

However, dad Chicco Twala has given numerous interviews defending his son against allegations that he shot and killed Senzo.

Chicco Twala told 702 in 2020: “I’m not powerful…I will never defend a criminal. If my son is guilty or has shot Senzo, even if there is a death sentence, I will be there to witness him dying.

“If my son had committed murder, I would in prison right now. I would have shot him dead”.

Chicco and Longwe have also revealed their desire to meet with Senzo’s family.

Speaking to News24 in 2020, Chicco spoke about his family feeling “vindicated” following the arrest of five suspects. He said: “Indeed, my son and I feel vindicated after the whole speculation was created on social media. My wish is to meet with Senzo’s family, especially his mother.

“The confusion caused by haters on social media really caused serious harm to the both of us. Moving forward, I will really want to meet the family”.