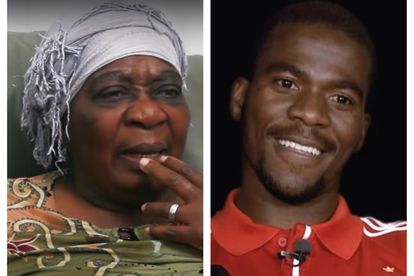 Senzo Meyiwa’s mom Ntombuthi Meyiwa has spoken out about being robbed by thieves posing as policemen.
Image via YouTube screenshot Phumlani Dube Show/Netflix Senzo Meyiwa: Murder of a Soccer Star

Senzo Meyiwa’s mom Ntombuthi Meyiwa has spoken out about being robbed by thieves posing as policemen.
Image via YouTube screenshot Phumlani Dube Show/Netflix Senzo Meyiwa: Murder of a Soccer Star

Over the years, the mother of Senzo Meyiwa has suffered heartbreak after heartbreak.

First, it was the death of her Bafana Bafana goalkeeper son in 2014, after he was shot and killed by unknown gunmen.  Five years later, her husband Sam Meyiwa would die following complications linked to a stroke. Now, the mother of the slain soccer star is enduring a messy murder trial into the death of Senzo, as well as public scrutiny of the family.

To add insult to injury, the elderly woman revealed she was recently robbed by criminals posing as policemen.

Speaking on the Phumlani Ndube show on YouTube, Nthombifuthi Meyiwa – the mother of slain soccer star Senzo – revealed how she had felt prey to con artists.

Nthombifuthi – who hails from Umlazi – revealed that she had been duped by a group of criminals. Speaking to the YouTuber in a video uploaded over the weekend, the woman revealed how another woman struck up a conversation with her in an unknown shopping mall last week.

Relaying the course of events, Senzo’s mom recalls the mysterious woman picking up a purse on the floor, which lay in front of her trolley in the supermarket. The two women were then approached by a group of men posing as police. The men demanded the women’s belongings to allegedly search for stolen items.

After giving them all her personal belongings, including her bank pin, Senzo’s mom revealed the group of men never returned. But things got worse.

The emotional woman said in isiZulu: “I went to the bank and they said the money had been withdrawn. I cried until dawn and I regretted it because I always warned children about criminals but they caught me.”

Meanwhile, Senzo Meyiwa’s mom laid into the mother of Kelly Khumalo in a previous interview on the YouTube show.

Earlier this month, Nthombifuthi spoke at length to Phumlani Dube about her anger at Kelly’s mom Ntombi not reaching out to her.

Senzo was shot dead on 26 October 2014 in the Vosloorus home of Ntombi Khumalo. Present during his death was Ntombi and her daughters Kelly and Zandie as well as Kelly’s two children: Christian and Thingo. Senzo’s two friends Tumelo Madlala and Mthokozisi Thwala and Zandie’s boyfriend Longwe Twala were also in the home.

But despite public scrutiny, the seven witnesses claimed that Senzo was shot and killed by a group of masked men in a robbery gone wrong.

Speaking about Kelly’s mom, Ntombifuthi said: “‘I cannot lose a child and then don’t grieve with the family that lost a loved one, especially if that person has a child with my son”.

Senzo’s mom claimed she had welcomed Kelly and her family after she bore Senzo a child; daughter Thingo in 2014.

She continued: “We welcomed them when they brought the child. We didn’t welcome them because we love them, Senzo wanted us to check if the child really belongs to him. When something bad has happened to my child they decided not to come to me. How can a mother of the house decide not to come and grieve with us? She could’ve asked the police to guard her if she was afraid.’