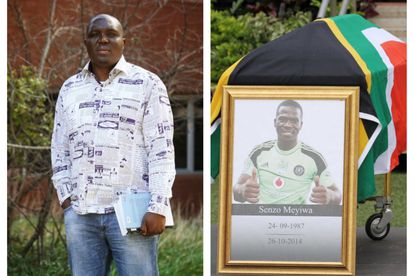 Reporter Mzilikazi wa Afrika has demanded answers from the police and NPA amid the Senzo Meyiwa murder trial.
Image via Twitter
@IamMzilikazi

Reporter Mzilikazi wa Afrika has demanded answers from the police and NPA amid the Senzo Meyiwa murder trial.
Image via Twitter
@IamMzilikazi

The reporter who scrutinised the case of Senzo Meyiwa in the Netflix doccie Senzo: Murder of a Soccer Star, has called on police to answer burning questions emanating from the murder trial.

In a Twitter thread, investigative journalist Mzilikazi wa Afrika has called on authorities to provide key information needed to solve the case.

Five men are on trial for the suspected murder of the Bafana Bafana goalkeeper who was shot dead on 26 October 2014. At the time of his death, Senzo was at the Vosloorus home of the mother of his girlfriend Kelly Khumalo

This, after the defence led by advocate Dan Teffo and Zandile Mshololo, presented a second police docket which up until now has never been made public.

In the docket, Senzo’s girlfriend Kelly and others in the home at the time of his death were charged with murder. They include Kelly’s mom Ntombi, her sister Zandie and boyfriend Longwe Twala, and Senzo’s two friends Tumelo Madlala and Mthokozisi Thwala.

Also in the home were Kelly’s two children: son, Christian, with ex-boyfriend Jub Jub and daughter Thingo, who she shared with Senzo.

But despite five men facing murder charges, the defence has shockingly claimed that Kelly and the rest of the occupants in the house were responsible for the death of Senzo Meyiwa.

Kelly Khumalo has maintained claims that Senzo was shot and killed in a house robbery gone wrong.

The trial will resume on Monday 13 June

With the discovery of a second docket at play, Mzilikazi wa Afrika has shared his thoughts on Twitter.

Afrika offered commentary during the Senzo Meyiwa Netflix documentary on his years of experience covering the murder case. The former Sunday Times reporter has also claimed that police have “bungled” the case.

He tweeted in a lengthy thread: “Police must tell South Africa who, within their ranks, allowed two different teams to investigate one case: team one reporting directly to minister Bheki Cele while team two to former commissioner Khehla Sitole.

“They must also explain why Maggie Phiri was not arrested on the spot for interfering with the crime scene after she admitted cleaning up the house before police arrived. They must tell South Africa why no single statement, from everyone who was in the house, was taken that night”

“The people who were inside the house must tell South Africa why they didn’t call the police or ask for help. It was only a neighbour, a retired cop, who blew a whistle to alert the others and personally called the cops. One cellphone, that was in the house, was never handed over”

“Two potential eyewitnesses, Thabang Makelane and Simphiwe Ngwenya, who was sitting on the street corner that night, are both dead. Simphiwe was shot and Thabang was allegedly poisoned. Thabang’s girlfriend was told to clean his room where he died and throw away everything in it”

“Senior police officers arrived at the scene that night, to do what exactly? Who was in charge of all the police that were there that night? Why no statements were taken from all the cops that came to the crime scene. Where did everyone who was in the house sleep that night?

WHY ARE THERE TWO DOCKETS?

Afrika also shared his thoughts on the two dockets and two sets of suspects in the murder of Senzo Meyiwa.

“The NPA must tell us which of the two investigating teams they recognise and why? They must also tell us which one of the two dockets they have built their case on? And what informed them to disregard the other docket over the other. The dockets have two sets of suspects, why so?”

“Can we have the names of everyone, police and neighbours, who were or came to the house? Can we have all the phone calls made by everyone who was in the house, before and after, Senzo was killed? Where is the towel that was used to stop Senzo from bleeding when he was rushed to the hospital?

Of a hat that was found at the crime scene, Afrika questioned: “Who does the hat belong to? What gun was used to kill Senzo, a revolver or a 9mm pistol? Who found the cartridge, where was it and when was it found? Amongst the arrested suspects, who had dreadlocks back in October 2014 and why did he cut them now?”