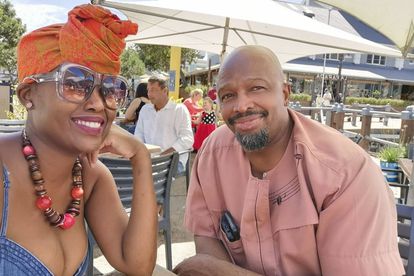 The Queen actor Sello Maake KaNcube has announced that he and his wife Pearl Mbewe’s wedding will take place at FNB stadium.

The actor took to his social media accounts to reveal the news to his followers two days ago (23 January).

Veteran actor Sello Maake KaNcube and his wife Pearl have recently announced that they will be having their wedding celebration at the FNB stadium.

The actor is marrying his brand manager who is 29-years younger than he is.

His wife also stated that those who are invited already have the invites.

“On our wedding day celebration… Seems like we are going to do very well with the traditional step magic moos!@

“We are already synchronized and we have not even gone through the step practicing phase as yet..”

“BoMntase, You are all invited! If you haven’t received your invitation by now khohlwa.”

“We’ll let you in with past proof of purchase of a ticket to FNB Stadium here we come.”

“Someone said marriage suits me.”

“But I say, I have been married before.”

“However, this time I chose well as I came from a point of having paid school fees with my previous partners!”

The award-winning actor Sello Maake KaNcube’s ex-wife – Palesa Mboweni is suing him for spousal maintenance as well as legal fees.

Sunday World reported that Mboweni served the legendary actor with two letters of demand, to pay her over R213 000 in legal fees, spousal maintenance, and a share of the division of their joint estate in Soweto.

The thespian confirmed that he received a letter of demand from Mboweni and said he’s in arrears because he is unemployed.

“I’m now maintained by my wife. I’m not working, it is difficult now, especially because of COVID-19.”