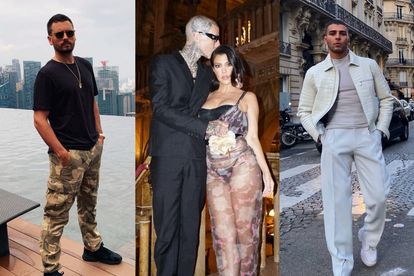 Scott Disick, the father of Kourtney Kardashian’s three children, allegedly thought he would find a “brother” in the reality star’s ex boyfriend Younes Bendjima, as he attempted to start a conversation about Kourtney and Travis’s public display of affection while in Italy.

“Yo is this chick ok!???? Broooo like what is this. In the middle of Italy,” wrote Scott to Bendjima.

However, Younes Bendjima was not having any of it and posted the screenshot on his Instagram story.

“Doesn’t matter to me as long as she’s happy. PS: I ain’t your bro,” replied Younes.

“Keep the same energy you had about me publicly, privately” wrote Younes over the screenshot when he shared it to Instagram.

The Algerian-born model went on to say that he had to share that screenshot because he had played Mr nice guy for too long with Scott Disick.

“Couldn’t miss this one. He’s been playing around for too long, tried to stay quiet and be the nice guy,” wrote Younes in a follow up Instagram story.

In the final season of Keeping Up With The Kardashians Scott revealed that he gets jealous when he sees Kourtney with other men. In the season finale, Scott made an apparent reference to Younes when host Andy Cohen asked him if he gets upset when Kourtney dates other men.

“I just want to kill them,” said Disick.

“Well, the last guy—let’s all be honest here. Nobody was happy with the last one,” he continued.

Kourtney and Younes dated for almost two years before they split back in 2018. However, the model did not remove pictures of Kourtney from his Instagram and the pair once visited Italy together as well.

‘KRAVIS’ WEIGHS IN ON SCOTT’S DM

Kravis has weighed in on Scott’s alleged DM. While Travis laughed it off sharing a cryptic Goodfellas meme while Kourtney took a bible route quoting John 15:7 on Twitter.

The picture that Scott shared with Younes was a paparazzi snap of Kourtney and Travis getting cozy on a boat in Italy, where the pair has been since for the last few days. The pair have been packing on the PDA, as always in Venice!

Kourtney and Travis, alongside Kris Jenner, Megan Thee Stallion, Jennifer Lopez and others were invited to Venice to sit in the audience at Dolce & Gabbana’s Couture show. Kourtney shared a picture of her and Travis on a boat with the caption “That’s Amore,” and then shared another steamy picture of what looks like a night out.

However, it was Kourtney’s goth look that had tongues wagging. The Keeping Up With The Kardashians star traded in her Balmain dresses and Jacquemus handbags for a chic mini skirt and bustier black top.

This follows Kourtney Kardashian helping Travis Barker get over his fear of flights earlier this month. The Blink 182 drummer has been afraid of flying since he was involved in a gruesome plane crash in 2008.