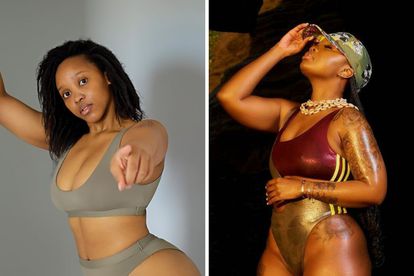 Hours after revealing the pain caused by trolls – which caused her to attempt suicide on multiple occasions – Sbahle Mpisane has thrown shade at former friend Sithelo Shozi’s plastic surgery.

Sithelo – the ex-girlfriend of Sbahle’s brother Andile Mpisane – has recently undergone a “mommy makeover” in Turkey.

SBAHLE BREAKS DOWN OVER CRUEL JIBES

On Wednesday, Sbahle Mpisane gave her followers a glimpse of nasty direct messages (DMs) she had received from her followers.

One particular message was from a woman who advised her to “amputate” her injured foot following her 2018 car crash.

She said: “I’ve [attempted to] commit suicide twice because of your people’s f**king words. I survived.

“Do you know how it makes me feel? I’m not ok! Just because I lift weights and am physically strong does not mean I’m not a strong person [mentally]”.

Sbahle then went on to encourage her followers to be “kind” to each other. “Just be mindful of what the next person is going through”, she added.

Not long afterward, Sbahle shared another video message with her followers. But this time, the personal trainer took a swipe at Sithelo.

She said in response to compliments about her weight loss and famous curves: “People trying to come at me about and saying I went to Turkey…wrong move”.

Sithelo caught wind of the shady comments and tweeted in isiZulu that Sbahle was “mentally unwell”. The mom-of-three is currently in recovery in Turkey following her extensive plastic surgery, including a Brazilian butt lift (BBL) this week.

But Sbahle’s verbal attacks on Sithelo is nothing new, claim tweeps.

Last month, Sbahle criticised Sithelo over her allegations of abuse against her brother Andile.

In a Twitter Space, the eldest Mpisane sibling questioned the credibility of Sithelo’s claims and criticised why the latter had a relationship with a then underage Andile.