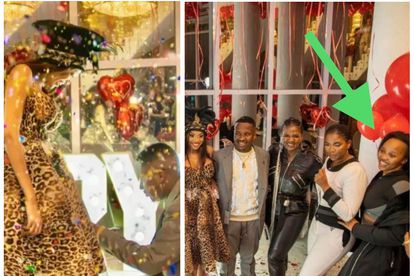 In a leaked IG DM, Sbahle Mpisane claims she was neither aware of Andile Mpisane’s wedding nor his bride Tamia.
Image via Instagram
@tamia_mpisane

In a leaked IG DM, Sbahle Mpisane claims she was neither aware of Andile Mpisane’s wedding nor his bride Tamia.
Image via Instagram
@tamia_mpisane

Sbahle Mpisane has shed light on viral photos of her appearing confused and dishevelled at brother Andile Mpisane’s wedding to Tamia last year, despite him reportedly dating Sithelo Shozi.

The fitness fanatic was heard in a leaked DM explaining the situation to her former friend Sithelo. In it, she claims to have “no knowledge” of Tamia, before the day.

In the clip, which was posted on celebrity blogger Musa Khawula’s Twitter page, Sbahle attempts to explain her side of the story.

The older Mpisane sibling claims to have never met Tamia Mpisane before the wedding day, which took place on 17 December. Sbahle was also seen wearing gym clothes, appearing to be caught off-guard by the day’s events.

She says: “I didn’t know about her…Everything to me was a surprise”.

Sbahle also tells SIthelo that she was forced to Instagram direct message her as she believed her phone calls were being tapped and recorded.

She continued: “I don’t know where you and I stand, how we should continue to go on…That’s why I want to talk to you”.

ALSO READ: Sithelo Shozi and sister fire back at Sbahle, mock her over 2018 car crash

ARE TWEEPS BUYING IT?

Following the IG DM leak, tweeps were left confused on who to believe…

@AbulelaF: “Sbahle Mpisane didn’t know Tamia? Haibo how long has Tamia and Andile been together. I would think as a sister she would know about her?”

Andile looked confused for a groom. It’s obvious that it was planned by the queen”

@abby_twa2: “Apart from the gym clothes she was wearing, on their reality show Sbahle once said she could go days without seeing Andile coz the house is huge n they live in different wings”

I believe Sbahle when she says she was surprised. Girl wasn't even dolled up like the rest of the ladies, clearly she was not included in the memo????‍♀️????‍♀️ pic.twitter.com/JDvZ5lPTPQ