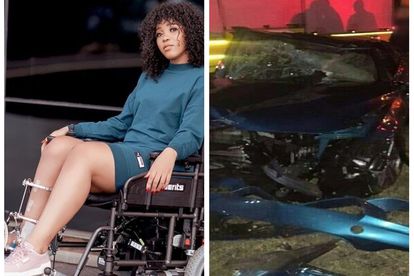 Sbahle Mpisane has had a rough few years; a car crash resulting in devastating injuries, a public break-up, becoming the source of social media trolls, and suffering from depression.

This week, the fitness fanatic became the source of Twitter trolls again after she waded into the drama surrounding her bother Andile Mpisane and his ex-girlfriend, and her former friend Sithelo Shozi.

On 9 August 2018, Sbahle Mpisane crashed her BMW 4 Series into a tree on Margaret Mncadi Avenue in Durban, after a night out with her girlfriends.

Paramedics plied Sbahle out of the car using the jaws of life, shortly before her car burst into flames. The personal trainer spent three weeks in a coma and many months in ICU. She also suffered from amnesia due to her head injury and could not walk after breaking both her legs.

Speaking in an interview with YouTuber Owamie Netshivhazwaulu in April, Sbahle revealed that she was “permanently disabled” after losing her ankle bone left her wearing a moon boot.

ALSO READ: Sithelo Shozi and sister fire back at Sbahle, mock her over 2018 car crash

In an Instagram post earlier this month, Sbahle also claims that her amnesia has left her with lasting memory loss. She said: “I will never recover fully from my amnesia, medical people will understand but I recovered with the necessary memories.

In her interview, Sbahle Mpisane also hinted that someone she knows was behind the crash.

She added: “Something happened, someone was the cause of my car accident…I happen to know the person. That person was my friend, but there’s nothing to talk about…because I’m alive.

“That person did come forward to say and agree about what happened. I will never reveal the person’s name. “I forgave the person because they didn’t do it intentionally. When alcohol is involved, a lot happens”.

In a Twitter thread posted this week, Sbahle Mpisane opened up about wanting to end her life as a result of her accident.

Prior to making her account private, she tweeted: “In 2018, whilst in hospital, I hung myself, but my nurse walked in as I just did so. My neck was bruised and I got secured for 24 hours in my room. In 2019 I planned [another] suicide attempt but woke up four days later. I apologised and promised God not to test him again after saving my life three times”

“In 2021 I had several suicidal thoughts but telephonically called a therapist in a panic because I feared to attempt burning myself to death as envisioned.”

Although she has not attempted suicide since, Sbahle Mpisane still struggles with depression. She added: “I know I have always had a lot to be grateful for but when emotions kick in, we all become weak. I am still weak, I still don’t understand my survival but maybe there is a purpose for it all.

“Depression is not controllable but treatable. I survived from it & it still creeps in but I continue to live happily.”