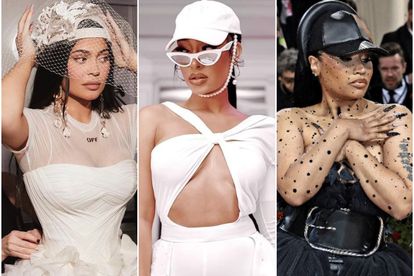 Despite recently landing on the worst-dressed fashion list, influencer Sarah Langa prizes herself as being a step ahead of trends.

The beauty blogger was mercilessly mocked by tweeps following her appearance at the Showmax premiere of the Real Housewives of Lagos. But following the Met Gala on Monday night, it seems the stylish star may be vindicated.

The A-listers also shared a similar accessory to their fashion look – a cap – which was incorporated into their outfits.

The sporty look was reminiscent of what Sarah Langa wore closer to home at the launch of Showmax’s Real Housewives of Lagos (RHOL) earlier this month.

Sarah Langa sported a look put together by celebrated South African designer Rich Mnisi, which consisted of an all-white cut-out jumpsuit and floor-length cape. She completed the look with a sporty cap, cat-eye sunglasses, and pearly accessories.

Following the backlash of her RHOL outfit, Sarah Langa tweeted at the time: “I completely get why it’s not easy to get it. Individuality and intellectualising beauty is uncomfortable”.

But following the Met Gala fashion extravaganza, the star reminded her critics of her

In a since-deleted tweet, Sarah posted: “It took you 3 weeks and a Met Gala to get us”.

But despite Sarah Langa boasting about her trendsetting ways, a few tweeps were still not impressed

@SONGE7O: “Sarah Langa so badly wants us to believe that outfit was good”

@nuehlita: “Sarah is seeking validation from Kylie Jenner’s outfit when Kylie’s outfit is just as deranged and cheap looking as hers”

@cindy_sthe: “Doesn’t matter if Nicky Minaj is inspired by Sarah Langa… Ikepisi is still not giving.

@SiphokaziM_: “It’s still a no for the caps for me. Not when Sarah Langa did it and still not with Nicki”

Others, praised Sarah Langa for being “fashion forward”.

“Sarah Langa crawled so Kylie could walk!”, tweeted one fan.