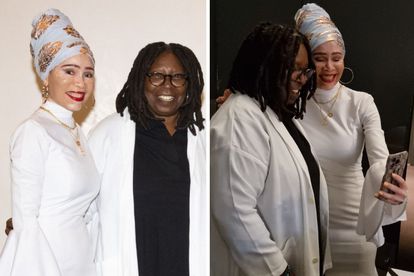 Whoopi Goldberg and Leleti Khumalo of ‘Sarafina’ reunited for the 30th anniversary of the struggle film. Many wondered where Somizi is.
Image via Facebook
@videovisionsa

Whoopi Goldberg and Leleti Khumalo of ‘Sarafina’ reunited for the 30th anniversary of the struggle film. Many wondered where Somizi is.
Image via Facebook
@videovisionsa

It’s been just over 30 years since Sarafina! first hit our TV screens and became one of the most iconic apartheid struggle movies ever released. To celebrate the milestone, some of the movie’s cast members, namely Ntombikhona Dlamini, Nandi Ndlovu, and Lindiwe Dlamini, joined Leleti Khumalo and Whoopi Goldberg gathered to watch a screening of the film hosted by movie producer Anant Singh in New York earlier this week.

Photos of the gathering were shared online leaving many South African users wondering why Somizi was not invited to the shindig – of course, they also made a few jokes about his absence.

Tweeps wonder why Somizi was left out of ‘Sarafina’ cast reunion

The cast of Sarafina! recently gathered in New York to celebrate 30 years of the world-renowned struggle movie.

According to Briefly News, stars of the movie, Ntombikhona Dlamini, Nandi Ndlovu, Lindiwe Dlamini, Leleti Khumalo, and Whoopi Goldberg all came together to commemorate the movie that first hit our airwaves 30 years ago.

Photos of the reunion were shared online and left many people wondering why Somizi – who played Whacko in the movie – was not included in the photos.

Many people resorted to joking about Somizi’s absence while others felt bad for the Idols SA judge who has seemingly been left out.

Hilarious comments are made

Some wondered whether or not he is not considered important enough.

Read some of their hilarious comments about the missing Somgaga below:

“Somizi was not even a main character.”

“Somizi was probably the one taking the picture, why is he not on the pic?”

“Somizi was an extra ne?”