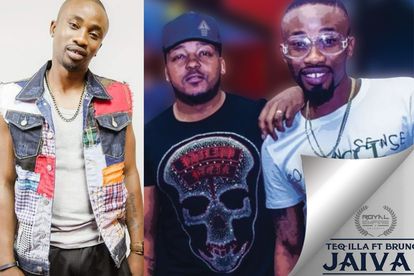 Hip-hop musician teQ-illA has dropped a new single, titled JAIVA, in honour and memory of late rapper and former Rhythm City actor Brian ‘Bruno’ Majola who passed away this week.

JAIVA is not just a tribute song to the late musician and actor, but also features Bruno.

“I’ve been speaking to Bruno for us to shoot a music video for #Jaiva… Now that he’s gone, I have decided to drop the song for free downloads,” said teQ-illA.

“Slikouronlife offered to release the song in honour of Bruno. It will be available exclusively on Slikouronlife.”

teQ-illA made the song featuring Bruno free to download for his fans to listen to him for the last time.

WHAT HAPPENED TO BRUNO?

The former ‘Rhythm City’ actor and kwaito star passed away on Monday evening. He was found dead by his girlfriend, who was taken in by the police for questioning. He was 36 at the time of his death. Bruno’s cause of death is yet to be confirmed.

Having spent time in prison, Bruno turned his life around and focused on his talents.

He dappled in music with his ex-prison mate to form Gumshev, a music group that spoke about the life of an inmate and gangsterism through music.

BRUNO HAD SUCCESS IN MUSIC AND ACTING

Having met success in the music industry, he went on to become an actor. He became a popular feature on defunct etv’s Rhythm City as Bongani – a very uneasy artist to work with.

Since his passing social media has been flooded with tribute messages.

His former cast mate, actor Zola Hashatsi, took to Instagram to share a tribute to the late star.