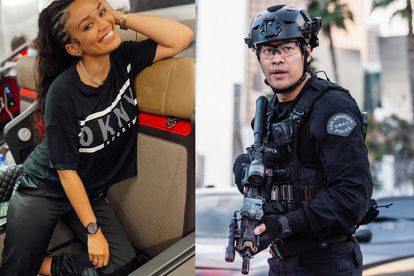 American actor David Lim opened up about working with South African actress Pearl Thusi on Quantico over a Zoom interview according to IOL.

DAVID LIM ON PEARL THUSI: ‘WE HIT IT OFF FROM THE GET-GO’

The S.W.A.T actor explained that he got a regular gig on Quantico starring alongside Pearl Thusi, while also doing modelling gigs. David played the role of Sebastian Chen on Quantico while Pearl played Dayana Mampasi.

“And that was when I did ’Quantico’ with Pearl Thusi, a South African native, right? So, in that six years, before I found myself with a regular gig on the show, the jobs I was getting was modelling jobs – that was kind of my survival gig,” said David, according to IOL.

He went on to say that he and Pearl hit it off from the beginning and he loves her because she’s “wild”.

“Oh yeah, I love Pearl. She’s wild. We hit it off from the get-go. That was a great time. I moved from LA, picked up my stuff and flew out to New York to film Quantico,” he continued.

He added that she was so much fun and he loves that she continues to do what she needs to do to be successful.

“I loved the people that I got to work with on the show, especially Pearl. She was so fun. We still keep in touch to this day. I love that she continues to do her thing and be successful,” he added.

South Africa may still be on season four of action drama series S.W.A.T but the US is diving into the fifth season. David revealed that the COVID-19 pandemic and the #BlackLivesMatter and #StopAsianHate movements were weaved into the storyline for season five.

“You know that was happening right during Covid, it felt pretty close to home when we were shooting at the time,” said David.

David plays the role of Officer Victor Tan, whose mom is attacked for being Asian while out shopping. He then attempts to track down the perpetrator.

“And there was hate crime against Asian individuals in the US and all over the world. I told myself, ‘Don’t mess this scene up. You got to deliver’,” he continued.

Season five of the series is also expected to be “action heavy”.

“When they let us do them (stunts), we are happy to hop in there. We worked with former Navy SEALs and former S.W.A.T. officers in training for the pilot because it is so action-heavy,” he continued.

“We almost went through a sort of boot camp where we trained for several hours of the day with our S.W.A.T. tech adviser, Odie Gallop, who is still with us and is a very good friend of mine,” he added.