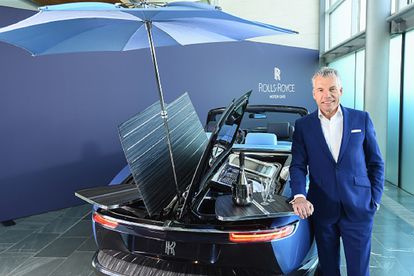 Rolls-Royce recently unveiled the world’s most expensive car – the cabriolet Boat Tail with a price tag of R390 million.

According to Robb Report, the Boat Tail is based on the aluminium spaceframe platform shared by the Phantom, Cullinan and new Ghost models, and it shares the same 6.75-litre V-12 engine. Otherwise, this remarkable car is decked out like no other Rolls-Royce on the planet.

“The stunning cabriolet is named after the tapered rear end – a style which dates back to the 1920s, when cars like the Auburn 851 Speedster and Bentley Speed Six Boat Tail were the talk of the town,” the publication reports.

Beyoncé and Jay-Z behind the wheel?

It is said that the example showcased is one of three different Boat Tail versions that have been recently hand-built as customer commissions, this one for a mystery man and his wife living in the United States believed to be Jay-Z and Beyoncé.

A sneak peek at the Rolls-Royce Boat Tail

Jeremy Taylor got a sneak peek of the car and said that its most eye-catching feature is the hand-painted Azur bluebonnet, graduating down to a lighter shade, while a painted Rolls-Royce pantheon grille replaces the traditional stainless-steel finish for the first time in the modern era upfront.

The Boat Tail was also made with a picnic in mind as it boasts a dual champagne cooler and a set of crockery by Christofle of Paris matched to salt and pepper grinders, all engraved with the car’s name.

The crowning glory, however, is a parasol that slots into the rear of the Boat Tail to provide extra shade.

“One of the great characteristics of piloting a Rolls-Royce is the light steering and thin steering wheel,” notes Alex Innes, the head of the marque’s Coachbuild Design department.

What’s more, this particular client reportedly likes to remove his wristwatch when driving and hated the idea that it would be stowed of sight. That’s why they worked with Swiss-based House of Bovet to create reversible “his and hers” watches with a special slot for them built into the car.

The Boat Tail is ultimately a four-seat convertible with an emergency tonneau, just in case the heavens open. The car is also provided with a detachable carbon-fibre roof that turns the Rolls into a breathtaking coupe.