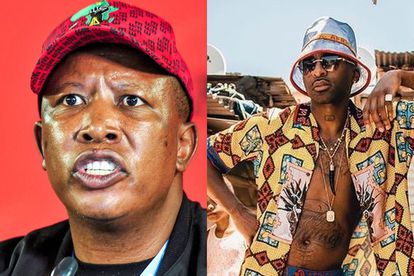 EFF leader Julius Malema says he did not attend late rapper Riky Rick’s funeral because he ‘does not believe’ in taking your own life. Images via Twitter @ shaun_dlanjwa @ZAtrendz

EFF leader Julius Malema says he did not attend late rapper Riky Rick’s funeral because he ‘does not believe’ in taking your own life. Images via Twitter @ shaun_dlanjwa @ZAtrendz

The local hip-hop community is still mourning rapper Riky Rick following his passing on 23 February. The rapper passed away at his Johannesburg north home after taking his life. Several of the Boss Zonke hitmaker’s colleagues and closest friends attended his funeral but one political figure chose not to attend.

Speaking on Tbo Touch’s radio show on Friday 24 June, Economic Freedom Fighters (EFF) leader Julius Malema said he did not attend Riky Rick’s funeral because he “does not agree” with people who take their own lives.

On 24 June, Julius Malema joined Tbo Toch on his Metro FM radio show, The Touchdown, to chat about his life as a young boy, his political career and a few other social issues affecting the country. Malema also surprised listeners with a DJ mix.

The politician told Tbo Touch that he does not attend funerals of those who take their own lives, adding that he believed that Riky Rick could’ve reached out for help before his untimely passing.

“If we are going to resort to that, then our children will no longer speak to us. We will just wake up in the morning [and] they’ve committed suicide. You must speak!” said Malema.

“We need to encourage our people to speak. You will become a laughing stock for that time but a solution will be found. There’s always a solution.”

“Killing yourself is not a solution,” he continued.

Tweeps were not pleased with Julius Malema’s explanation about why he did not attend Riky Rick’s funeral. Many slammed the politician for his views on the late rapper’s mental health issues.

“Julius Malema needs to learn how to keep quiet! Mental health is real, for him to just pop up like, is highly irresponsible; especially in an overtly patriarchal, stigmatic & ignorant black society like ours,” wrote one tweep.

“He clearly doesn’t know anything about depression. How insensitive of him. Should have just shut up,” wrote another tweep.

“This is so ableist. His views are extremely dangerous and WRONG. Stop this. Stop it immediately.”

“The show features a few selected MaXhosa looks that are inspired by Riky Rick, as a special tribute for the selfless patriotism, love and dedication he had for the brand.”