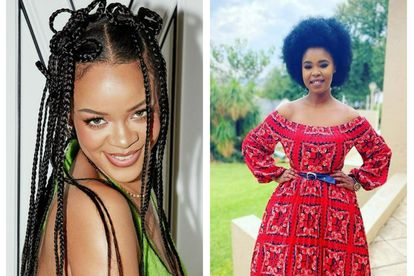 Pop musician Rihanna Fenty is officially back from the music scene after a 6-year hiatus with the release of one of Black Panther: Wakanda Forever‘s soundtracks.

The song Lift Me Up was released on Friday 28 October and was released on her own Westbury Road label in collaboration with Roc Nation, Def Jam Recordings and Hollywood Records.

Lift Me Up is in collaboration with Afrobeats star Tems, Oscar-Grammy Award-winning producer Ludwig Göransson, ‘BP’ director Ryan Coogler – as per TMZ.

The song is said to be a tribute to the late Chadwick Boseman, the star of the first Black Panther: Wakanda Forever film.

South Africans are already comparing Rihanna’s vocals to Zahara’s when the song starts. Zahara is topping the trends list on Twitter.

“That first “Liiiiift me up” is definitely Zahara 🤣😂🤣😂. Love me some Riri. The song is very nice,” said @uNhlaka_

“Am I the only one who heard it? Who heard Zahara at the beginning on Rihanna’s Lift Me Up? 🥺It’s a beautiful song nonetheless,” said @Iam_Kardas.

“This is why Rihanna ain’t been giving y’all music, she gives y’all something and y’all say she sounds like Zahara 🤷🏽‍♀️,” said @LineoSehloho.

“The vocals are great on Lift me up and I’m a big Riri fan.. But it sounds more like Zahara than Rihanna… But here for it❤️,” added @Azenati3.

“I’m hearing Zahara’s voice on the new Rihanna song also Rihanna’s voice sounds like it has broken again, very nice and deep. How many times can a person’s voice break in their lives?,” asked @maverickvaks

‘NOT FEELING IT’ – BACK TO THE DRAWING BOARD FOR RIRI?

It seems Riri’s fans are not feeling the song but they have not shut it down completely.

“I feel like the Rihanna song will hit Better when it’s played in the movie. I am not feeling it right now,” expressed @sufferfor600

@madsavvy1 said, “I’m sorry I was sooooo hyped for this Rihanna song and I’m just not feeling it. It’s beautiful for the movie and meaning behind it but I didn’t want this to be HER comeback!”

Listen to the song below: