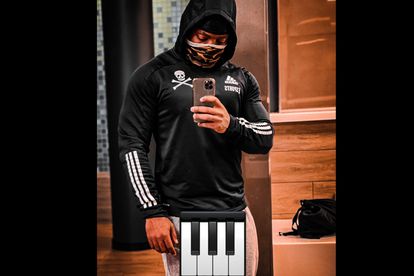 South African DJ Kabelo Motsamai, popularly known by his stage name Prince Kaybee, took to Twitter on Wednesday 8 September to show off his physique but strategically covered his crotch area.

Prince Kaybee took to Twitter to show his 834 500 followers his impressive physique. In the picture, the DJ wore grey sweatpants and a black Adidas jacket with a camouflage-printed mask. He placed a piano emoji over his crotch and Tweeps were calling for the Club Controller to remove the emoji.

While others brought his beef with rapper Cassper Nyovest into the picture, literally.

Women were not the only ones calling for the emoji to be removed.

“What’s wrong with (men) on these streets commenting for the removal of that amapiano,” wrote a Tweep when the post was translated to english.

While most Tweeps were calling for the emoji to be removed, another Tweep found it ironic that Prince Kaybee now wants to cover up after they’ve already seen what he’s hiding.

“What’s the point of hiding it because we’ve already seen it?” wrote a Tweep.

The Tweep is referring to an incident back in May when DJ Hazel Mahazard leaked a nude picture of Prince Kaybee on Twitter. This was the aftermath of another woman, by the name of Eurica who came out with screen recordings of her cheating scandal with Kaybee while he was with his long-time girlfriend radio host Zola Ayabulela Mhlongo.