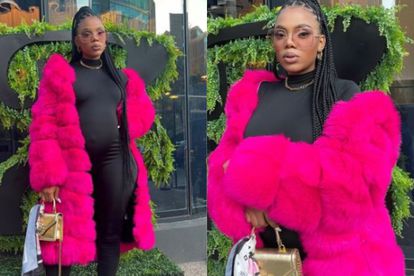 Londie London opens up about her second pregnancy. Images via Instagram @official_londie_london.

Londie London opens up about her second pregnancy. Images via Instagram @official_londie_london.

Musician and reality star Londie London opened up about her second pregnancy in her cover story interview with Batswadi Magazine on Wednesday 1 June.

LONDIE LONDON: ‘MY BELLY IS HEAVIER’

Londie London opened up about her second pregnancy amid rumours that her partner, Hlubi Nkosi is expecting a child with another woman. She revealed that her belly is heavier this time. So, she does not know whether this means she is carrying a girl or a boy.

“I don’t think any pregnancy is easy. My first and this one have both had their challenges and different ones at that. Overall both were smooth in terms of health but I do however feel with this one that my belly is heavier. I don’t know what that means on a superstitious level, whether it means I’m having a girl or boy,” she said in an interview with Batswadi Magazine.

She went on to say that she is hoping she has a girl. Londie and her partner Nkosi welcomed a baby boy together in March 2021.

“I’m hoping for a girl though. I’m more free with this pregnancy, I feel a new personality of yourself is revealed with each pregnancy. I’m more excited and energetic this time around. With my first pregnancy, I was lazy and didn’t do much. I’m eating a whole lot too with this one. Whatever baby wants, baby gets. I’ll see after I give birth on how hard I’ll have to work at the gym,” she continued.

THE ‘RHOD’ STAR HAS LESSONS FROM FIRST PREGNANCY

The Real Housewives of Durban (RHOD) star revealed that she has learnt lessons from her first pregnancy such as this drive to better herself.

“The lessons I’ve learnt from my first child and those I’m carrying into this child now are first acknowledging that life is beyond it just being about me now. I have this drive of wanting to better myself, not for me but for them. That’s not just with pregnancy but with motherhood as a whole. I now feel like I’ve found myself,” she said.

“I’m more ambitious and purposeful. I know who I am. I’ve grown into a woman that I’ve always wanted to become, and yet I’m still on the journey to becoming that. I don’t have a name yet for the baby, all I know is I want its meaning to be about life as the baby has given me a new sense of life and living,” she continued.