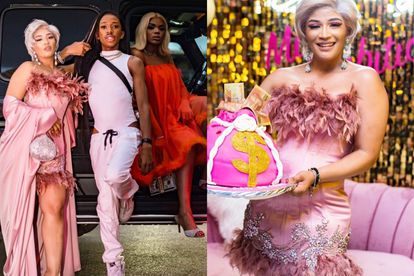 The outspoken and feisty Annie Mthembu marked her 30th birthday with a star-studded celebration including co-stars Londie London, Sorisha Naidoo. Kgomotso Ndungane, who starred in the first season of the reality show also attended along with media personality Lasizwe Dambuza.

Annie posted snaps from the evening along with an appreciation post.

“Then my sisters @iam_mial x @kaylyn_yon who always go above and beyond for me. I appreciate you guys so much! And then last but not least everyone who prayed for me, sent messages, sent gifts ,those who called and those who came to turn up with me! Thank you so much for taking the time and your kindness,” she continued.

“#MrsAnnbitionsDirty30 was everything I imagined. I spent time with people I love and my heart is so full! For me 30 is about accepting yourself for who you are; knowing who you are and using that knowledge to build your legacy. #RichBxtchEnergy is about hard work, dedication and building an empire,” she added.

A post shared by She Who Is Favoured ???? (@mrsannbition)

Sorisha, Kgomotso and Lasizwe all shared snaps from before, during and after the party! Take a look…

“Happy 30th my babe, if anyone can throw a party, it’s you boo!” read the caption.