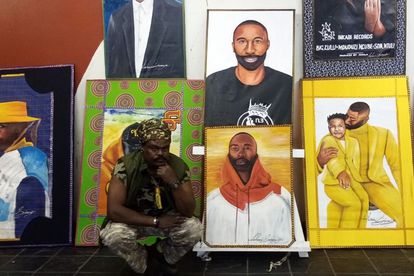 In preparation for his six-month solo exhbition at Museum Africa in Johannesburg, Rasta is recalling of the paintings he has sold or donated. Image via Twitter @RastaArtist

In preparation for his six-month solo exhbition at Museum Africa in Johannesburg, Rasta is recalling of the paintings he has sold or donated. Image via Twitter @RastaArtist

For years, Zimbabwean-born artist Rasta has wowed Mzansi with his paintings of high-profile figures. He has painted the likes of Grammy-winning DJ Black Coffee, president Cyril Ramaphosa and Somizi’s late mother, Mary Twala amongst several others.

In preparation for a six-month solo exhibition at Museum Africa in Newtown, Johannesburg, Rasta is recalling all of his paintings that he has given to several public figures. Rasta’s exhibition is set to kick off on Friday 27 May.

ALSO READ: Rasta pays tribute to Citi Lyts: ‘Your contribution to music will be missed’

Taking to Twitter on Monday 16 May, Rasta shared that he will be showcasing 300 portraits at his solo exhibition in Johannesburg. In his statement, the artist said he needed to “borrow” artworks he has donated or sold for the exciting exhibition.

“The exhibition will give value to the portraits, create publicity in the painted public figure and grow [his] profile as South Africa’s favourite artist,” read the statement.

“We would therefore appreciate it if all public figures would answer to this call of portrait recalls.”

“Depending on the agreement between Rasta and the public figure, the portraits can be commissioned post-exhibition or delivered back to the owner.”

A LOOK AT RASTA’S YEAR

Lebani Thaka David Sirenje popularly known as Rasta has had a fantastic year so far. The talented artist scored himself a cameo in a Chicken Licken advert alongside former Rhthym City actor Mpho Molepo.

In the advert, he plays a sketch artist who works for the police to help solve a multitude of crimes, but his sketches lead the cops to the wrong suspects.

Although the advert mocks his work, he told City Press that critics are just a “stepping stone” for him.

“I’m humbled to keep my cool and soldier on every time I’m being attacked. If you aren’t moving, people won’t say anything about you.”

TAKE A LOOK AT THE ADVERT HERE

RASTA’S BEST PORTRAITS OF 2022 SO FAR

One of his latest paintings is of former Economic Freedom Fighters (EFF) secretary general, Godrich Gardee’s daughter Hillary, who was found dead on 3 May, four days after she went missing.