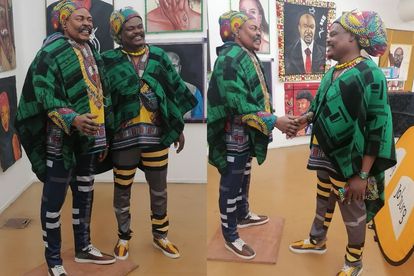 Rasta received a life-size statue of him by fellow artist Lungelo Gumede.
Image via Twitter
@rastaartist

Rasta received a life-size statue of him by fellow artist Lungelo Gumede.
Image via Twitter
@rastaartist

Rasta – who is known for his less-than-impressive celebrity portraits – this week received a life-size wax statue in his honour.

The statue was presented to him by fellow artist Lungelo Gumede, known for his previous works creating sculptures of Zola 7 and Nelson Mandela.

The life-size statue of Rasta – real name Lebani Sirenje – was unveiled at the artist’s latest art exhibition at Museum Africa in Johannesburg.

Gumede spared no effort in his detailed and realistic statue which wore a colorful ensemble with a head full of dreadlocks.

The real Rasta is displaying over 300 portraits in the six-month exhibition – including paintings of late stars Menzi Ngubane, Patrick Shai, HHP, and Mary Twala.

And unlike recipients of his own artwork, Rasta was pleased with the results of his statue. “Now I finally have a twin”,  he posted on Twitter.

Whilst Rasta’s paintings often trend for him missing the mark, social media users were impressed with the statue of him.

In fact, many tweeps felt that Lungelo Gumede – who confessed to destroying a statue of Riky Rick because he felt “threatened” – missed an opportunity to poke fun at the infamous artist.

Khanyi_nwamagezi: “Why did they make it look like him.. should have given him a taste of his own medicine”

Lwandile_17: “I wonder if your twin does better paintings or not?”