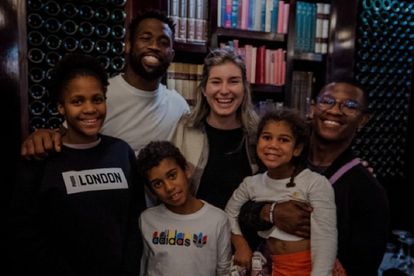 The Kolisis recently tried a new TikTok challenge and failed dismally at it. Image via @siyakolisi/Instagram

The Kolisis recently tried a new TikTok challenge and failed dismally at it. Image via @siyakolisi/Instagram

The Kolisis are one of South Africa’s favourite families, not only because of Siya’s rugby skills or how much he and his wife Rachel love each other, but it’s also because they keep fans entertained on social media.

A recent video, showing the close-knit family trying their luck with the viral My Money Don’t Jiggle Jiggle TikTok challenge, has left fans in stitches.

The Springboks captain took to his Instagram to share a funny clip of his family attempting the challenge a capella style while vacationing at Angala boutique hotel in Franschhoek.

Their hilarious video, which has garnered over 82 000 views, shows very awkward hand and leg movements — mostly from Siya and Rachel — while the kids Liphelo and Liyema (Siya’s siblings) look so embarrassed they want to crawl into a hole and hide.

Of course, fans weighed in in the comments section.

“I guess we all know who’s idea this was,” one follower replied.

“Liphelo and Liyema we about to go all-in until they saw how wrong everyone else was getting it,” another IG user wrote.

“Please explain Rachel’s moves ..got to love the passion,” another replied.

While someone else said: “This video is probably the best video I’ve ever seen! gotta love the K’s.”